Colin always used to laugh at me when I voted for the Green Party in local or national elections. He would mutter about them all being a bit weird and never getting elected so I was wasting a vote (but as no one other than Conservatives ever got elected in Suffolk Coastal it was more of a protest vote anyway!)

But I hope if he had been alive to vote in local District Council elections this year he too would have voted Green because this guy was a Cub Scout in my pack when I first started helping, has been a very good District Councillor for the neighbouring ward  and a County Councillor too, and has lived just down the road from where Colin lived and where his brother still lives for all his life. 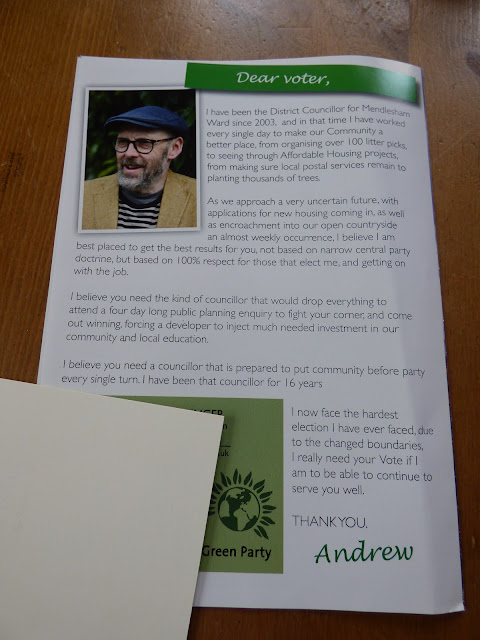 And when I've seen him at  local events in the last two years he still recognises me - which is amazing seeing as we were across the other side of Suffolk for so long.

With the boundary changes for election wards he is hoping to become a councillor for the new much bigger area.

I popped down to the village to vote and thanked-the-Lord that I wasn't sitting there in a chilly village hall being a polling-clerk for 15 hours like I have done in the past!

Back Tomorrow
Sue
Posted by Sue in Suffolk at 06:00
Email ThisBlogThis!Share to TwitterShare to FacebookShare to Pinterest
Labels: Local Events