First of all a BIG thank you to all the comments this week about my charity shop finds on Monday, cheesemaking on Tuesday, books on Wednesday (one comment gave me an idea for another post and no, I definitely don't want a kindle!) the new raised beds on Thursday and my  post that wasn't a post on Friday, it wasn't about bloggers and I'm glad it raised a smile as it was meant to.
Apologies for not replying to everyone.
A few notes from the week................
On Monday I baked a batch of Fruit Slices (on the separate recipe page, scroll down) but realised once I got started that I hadn't got any ground almonds or almond essence so they are a bit plain! I'm still gradually restocking the cupboards after running things down before moving.
An email on Monday announced the availability of early-bird tickets for the Suffolk Show 2022 which will be on the 31st May and 1st June next year. On the website was a countdown clock with 343 days to go and hours, minutes and seconds counting down..............that's really looking ahead with enthusiasm!!
Better get my ticket and save £3. Had to smile on the ticket application page as Adults are able to get a 2 day ticket making a saving over the cost of 2 x 1 day tickets,  but that choice isn't available to seniors over 65, perhaps they think us poor old people wouldn't manage to walk round the acres of showground on both days..............in my case they're probably right!
The greenhouse glass and frame arrived before 8.30 on Tuesday morning and it was only by luck that I knew it was coming. I'd rung on Monday to check the actual size needed for the concrete base and asked what the time lag was now on delivery and installation. He looked it up and said "it's coming tomorrow, you should have had an email or text message". No I said or I wouldn't be asking! Luckily I managed to shift a few things in the garage to make a space for the crate of glass also luckily the driver was willing to bring the bits right up to the bungalow as "they are only obliged to deliver to the kerbside!" Pleased it has arrived already as initially it wasn't expected until September although installation is still a date unknown in the future, which will give time for the concrete base to harden up.
On Wednesday......
Someone asked what will I be growing in my 3 vegetable beds - and the answer is - much the same as I did at Clay Cottage (but without the potatoes) but not this year. The soil needs building up and  lots of compost added to make it good enough for seeds  as what was under the grass was solid heavy clay. There's time for runner beans I hope and  perhaps some winter veg plants. Next year the greenhouse will be up and then I'll be all set.
Thursday morning was shopping, Morrisons was so busy, the A140 was so busy, everywhere is busy.....is it really because the part of the population who usually head off to foreign places are having to stay at home?!
Yesterday I had to be up in good time for the men to arrive to do the concrete base for my greenhouse. They arrived and took off the turf, got the wooden bits in round the edges (that have a proper name that I can't think of) and then it started to pour with rain which isn't much good for laying concrete. So they'll be back Monday afternoon. The ballast, sand and cement are all here ready. (They could have finished because the rest of the day was fine- Oh well)
Flowers on the table this week was just one rose at a time. This is a lovely peach colour from a small bush, sadly no fragrance at all. 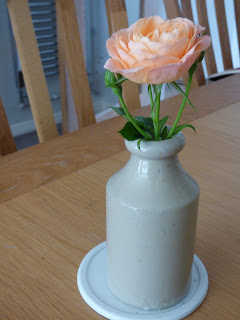 and then a gorgeous yellow/orange. Again very small roses from a small leaved bush and no fragrance. 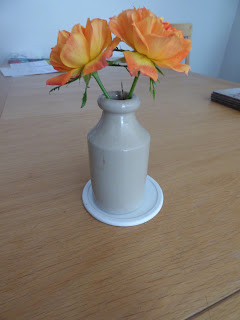 I've sniffed my way round all 6 climbing roses and the same number of smaller bushes and only one has any perfume to speak of.

It's dawned on me that the colourful plants in the garden that were here when I arrived all have relatively short flowering periods (apart from the climbing roses which should keep going for several weeks). Lupins, foxgloves,peonies, - beautiful for a while but then gone....maybe a few second-flush flowers later if it's not too dry.  So more absent friends I've thought of are Penstemons and perennial Salvias both tend to flower for more than a few days.

Have a lovely weekend - I will be back on Monday
Sue
Sue in Suffolk at 06:00
Share