We have internet at last. Would you believe the first hub thingy they sent was faulty so we had to wait for a replacement and we now are linked up again. In the end it was easier to go with BT for a year as half the equipment for fibre connection was already here. Blinkin' expensive, but we needed to get online ASAP for ordering tablets etc.

Thank you all so much for all the kind wishes. Each day here, so far, Colin has felt OK and we have been able to get some jobs done. He is at hospital again next week for bone marrow sampling and blood tests which will tell the doctors how things are going and how fast too. The doctor was planning to get funding for another type of tablet that's available but hasn't been used much. We don't know what side effects it will have. After that there is only the treatment that has been trialed in the US and is being tried here but only in Plymouth and would mean staying in Plymouth for several weeks for observation................. if he is a suitable guinea-pig. We are keeping positive...........mostly........ and can only hope for the best and we're still glad we moved here with a bit of space and things to do to keep us busy.

We had a bit of luck with finding someone to do decorating. Col asked the Estate Agents if they could recommend anyone locally and by coincidence the father of one of the girls there was just finishing decorating their office and was free to do 3 days for us straight away. He is actually over retirement age but likes to keep busy and picks and chooses. Knowing our circumstances he said he would do the spare room and then see what next. I think he only works for people that pass his test! As soon as he found out we were Suffolk people and not really incomers he was much friendlier!! In 38 years and 7 homes this is the first time we've paid someone to paint a room for us.........Ho Hum.
So spare room all prepared for the Surrey family to arrive tonight ready for tomorrow which is Colin's 60th birthday. ( Photos will follow!).

My LPG Rangemaster cooker is on order, but won't be here until early April and a fitter is organised to do the pipework. We need an electrician to do the electrical wiring for the ignition.
Colin has got a quote for resurfacing the track up to our cottage which is full of huge potholes as nothing has been done to it for years. There are 2 other houses who will put some money towards it too - hopefully. Next weekend, all being well, a friend of Cols will come and cut down some Willows and Col's brother and his mate will bring a log splitter so they can be cut and stored. There are a few small Ash trees that can be coppiced and used straight away. So it's all go here.

This morning we have sunshine at last and spent a while weeding the emptiest of the vegetable beds. It's now been covered with plastic to help it dry out a bit ready for sowing some seeds in a week or two. I haven't had a chance to get into the greenhouse yet to start in there but will soon.
In the ditch down the side of the field we found an old metal dustbin which Mrs F had been using  as an incinerator, the wind must have blown it off the field. It's perfect for forcing the very small Rhubarb crown   that I found....with great excitement!........ in among weeds on one of the other beds. 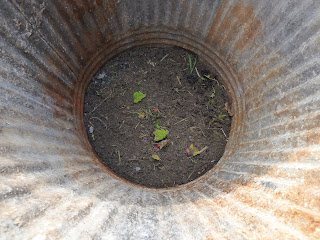 Another veg bed had been left to revert to grass so Col has sprayed that off and we've covered with plastic and if he is well enough in a week or two he'll get the rotovator out and turn it into a bed for potatoes..........if the machine will start after standing around unused for nearly 2 years. 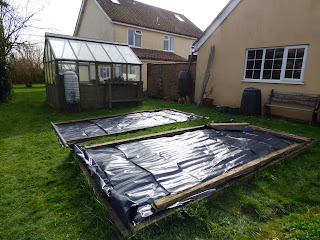 It's lovely to move to a new garden and see what's growing. My favourite things that have appeared so far are these very dark Hellebores...........terrible photo but you have to get down low to see them as they insist on hanging their heads. There are white and light pink clumps too. 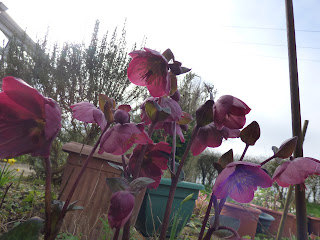 I shall now go and read all the comments and other blogs that I've missed in the last 10 days.

Back with more photos soon
Sue
Posted by Sue in Suffolk at 14:49
Email ThisBlogThis!Share to TwitterShare to FacebookShare to Pinterest
Labels: Growing Food, Non Hodgkins Lymphoma, The Garden