My real Dad was killed in a motorbike accident a few months before I was born. I've always known about it and where this happened. We went and put flowers on his grave often and there were  photographs of him at home. Then when I was three Mum married my Dad's elder brother and he was always Dad to me and real Dad was rarely mentioned.
It's all a long time ago but I've occasionally wondered if there was a newspaper report of the accident and what happened to the car driver involved.
Speaking to my cousin at Colin's birthday party earlier this month she said that among her late mum's (sister to both Dads) things she had found a newspaper cutting of the inquest and emailed it to me.
I didn't learn anything new - apart from the coroners and car drivers names - but now I want to see the report of the inquest when it reconvened. 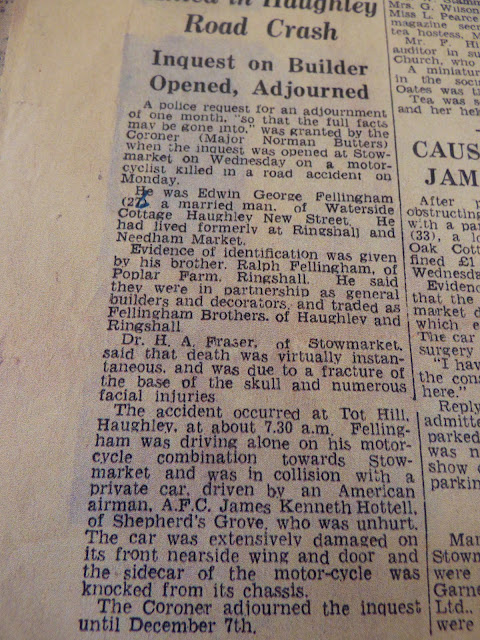 The accident happened  long before motorcycle helmets were compulsory, I wonder if he would have died if he'd been wearing a helmet.
No mention there of pregnant wife either, I'm sure it would have been made much of nowadays.

And the new news?
Yesterday morning Colin fixed up the stair gates - because our eldest had a picture on Instagram of Jacob trying out the stairs at their house........ and they are coming to stay at Easter.......10 months old and getting into mischief already! We are Prepared! ( By the way both gates were secondhand for £5 each saving us several £).
I took Colin up to hospital yesterday afternoon, they had him on a fluid drip ever so quickly and hope to start with the first of the tablets today. After 2 journeys to Ipswich in 2 days I probably won't visit today  - he will be so closely monitored with loads of blood tests so all should be OK.The nurses have had special training all about the new drug so know what to watch for.

Must say welcome to new followers too......hello all.

Posted by Sue in Suffolk at 07:02
Email ThisBlogThis!Share to TwitterShare to FacebookShare to Pinterest
Labels: Family, Non Hodgkins Lymphoma