Thank You to a Lovely Blog Reader 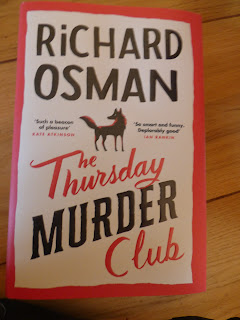 Thanks to A. who asked if she could pass on my address to P.  a kind reader from Wales who wanted to send me her copy after I said the library waiting list had over 500 people on it..... I would have waited but it's a treat that I don't have to and I promise to pass it on to someone else. Thank you P  - I will write and thank you properly.

Which reminds me......Spoiler alert! My Advent photos 2020 are going to be Christmas books, some of which I'd like to also pass on to blog readers. More about that next month as I have to read them myself first!

On what would have been library day last week Andrew the library man rang just to remind me that they wouldn't be round. We had a discussion about it being a shame that there wasn't a way to get the books reserved by mobile library readers to a library building so we could pick them up. He said he had 400 books in crates stuck waiting until the mobile can start up again. That has been the only problem with being a mobile user as readers who use a library building are able to book a slot to collect their reservations. But I've plenty to read here so waiting isn't a problem.

And talking about Spoiler Alerts............ with no one being allowed into the studio the Strictly Spoiler website has lost it's 'mole'. As the whole world knows, the "Sunday" results programme is recorded after the Saturday live programme so up until this year it's been possible to look online on a Sunday morning and find out which two couples were in the dance off and who got voted off. But "mole-less" this week it was completely wrong! Whoops.

And STOP PRESS - I accepted an offer on the house yesterday - which means it sold (subject to contract and all that jazz) within 4 days of going on the market! That's never happened before. The family buying have sold subject to contract to someone in rented accommodation but need to finalise here by end of March to catch the Stamp Duty Holiday and that means I'll need to rent for a few months (a holiday let maybe?) until the new build I want is available in May (Or April or June -  with a new build - who knows!)

I'm taking a few days off  blogging to start sorting things out!

Posted by Sue in Suffolk at 07:00
Email ThisBlogThis!Share to TwitterShare to FacebookShare to Pinterest
Labels: Blogging, My Books