Card Making from the Stash and Almost Fraud

When I've had a spare hour or so in the last couple of weeks I've been busy making some cards. 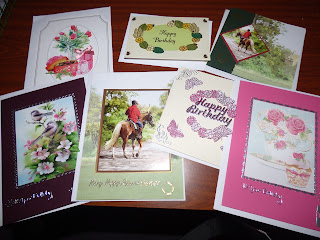 Most of these are from die-cut 3D decoupage sheets that I got from Craft Creations over a year ago. They are the cheats way of card-making! ( 3D  doesn't show up on photos)

We had a letter from the Department of Work and Pensions who've told us off for not telling them that Col was getting a Suffolk County Council pension. We thought we had told them......... the Tax Office certainly knew but I had no idea that  HMRC and DWP didn't communicate, so we've been getting too much Employment Support Allowance  money for the last few months which is akin to fraud. They'll claim it back from us of course.............thank heavens we saved the inheritance from my Dad is something I say quite frequently! Time to tighten belts again methinks.

Posted by Sue in Suffolk at 06:00
Email ThisBlogThis!Share to TwitterShare to FacebookShare to Pinterest
Labels: Card Making, Thrifty Lifestyle