Trees From the Auction

Col had made some more tree protectors and was keen to get a few more trees for his Birthday Wood so he could get them planted before going into hospital for the stem cell treatment.
He thought of the Auction rooms at Diss who sometimes have plants as part of their outside sale and had a look on line and found they had some good sized conifers. So we pootled off up there yesterday and waited for the things we wanted to come up

and came home with these. 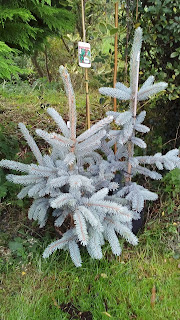 2 Picea Hoopsii  (Extremely prickly Blue Spruce) a  Silver Van Tol Holly and because no one else wanted it Col also bid on a Weeping Pussy Willow which he got for £2. There was a Monkey Puzzle Tree too but it was only a foot tall and still went for a lot more than we were willing to pay and also some nice little Yew trees but they were selling in lots of 16 trees - rather more than we wanted.

That really does mean we only have room now for Silver Birch.........probably.

Had a glance around the inside rooms at the junk type furniture stuff and the posher antiquey things but nothing we wanted and anyway we had to hurry home as Col was out in the afternoon at the leaving do for one of the blokes he used to work with.

Thanks for comments on the pear harvest and hello and welcome to two new followers.

Posted by Sue in Suffolk at 06:00
Email ThisBlogThis!Share to TwitterShare to FacebookShare to Pinterest
Labels: Colin's Birthday Wood