I love living back in Mid Suffolk!

While searching online for events happening around about I noticed that Wetherden History Group were having an open afternoon with displays about the history of the primary school. That's where I went between 1960 and 1966 and because Col went to secondary school in the area he was at school later with people from my primary school and he had cousins at the school in the 1970's so he came to have a look too.
The school was only a tiny school. 50 pupils there when I attended and just 6 in my year group. Later in the 1980s it got down to just 24. Then the school closed and became a nursery school and playgroup but now it's closed completely.
Sadly there is just one photo from the time I was there,of a new head teacher when she started, no class photos, no school records - Nothing. Although Col found his cousins on later photos. 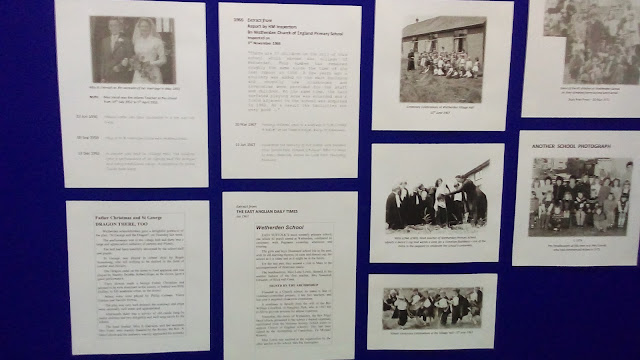 The year after I left the school celebrated it's centenary and a few photos of the celebrations appeared in the local paper. 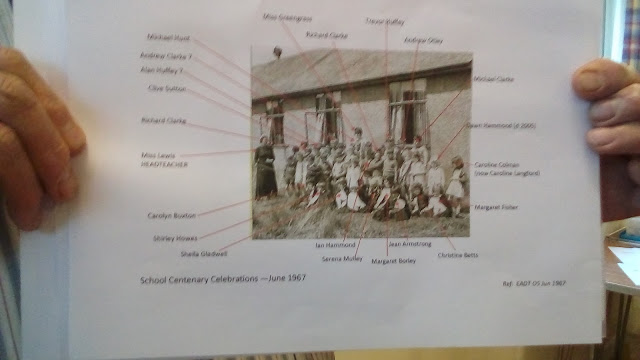 I only took my phone and the pictures didn't come out very well.

There were just two people looking round that I knew. One, also a Sue, was a few years older but still lives in the village and was able to tell me about some of the people I knew. Sadly she'd just last week been to a funeral of one of the boys in this photo and told me of one other who had died last year. The other person looking round was friend W from the Suffolk Smallholders Society who is much younger than me and was one of the last children at the school when it closed.

I don't have many memories of my primary school years but they are all happy ones.Must have learned something because I passed the 11plus and went off to Grammar school in September '66. Quite a change from a small school of 50 to a big school of 500. No introductory days back then just thrown straight in on the first day of term and the only people I knew were one boy the same age as me who also passed and a couple of older boy neighbours.

Posted by Sue in Suffolk at 06:00
Email ThisBlogThis!Share to TwitterShare to FacebookShare to Pinterest
Labels: Memories