Last Day of the Month - Ins, Outs and Frugal bits

How did July look in the Accounts Book?

Added to the usual income (County Council spouses pension and interest from savings) was the £55 Wayleave payment and £10 from books sold to Music Magpie.

Outgoings were the usual Direct Debits  for Council Tax, Phones and Charity and a new one of Car Breakdown Insurance after negotiating 3 months without paying any. I had set up a regular order of the cat calming plug-in pheromone stuff on Amazon - it's not cheap but has certainly stopped Polly over grooming herself.
Then there was food for me and cat and  2 new books mentioned yesterday.  There were no household bills in July but I used a bit more diesel this month - trips to the beach at Felixstowe with family added some extra miles, although still spending only half what I was spending each month before covid and price drop. The window cleaner turned up - neither of us could understand how 7 weeks goes round so quickly.
Car boot spending has been minimal - due to Sunday rain and the fact that I don't need anything so my purse is only opened if I spot something to put away for Grandchildren or something that will save me money later. There are loads of people selling and buying at Stonham Barns because the two bigger boot sales are not re-starting but much is tat and ornaments. Last Sunday I spent just £2, the boxes of matches were 50p each which I thought was a good saving but turned out to only save 25p each box and when I put them away I found there was already a box in the cupboard..........no matches needed for ages now. 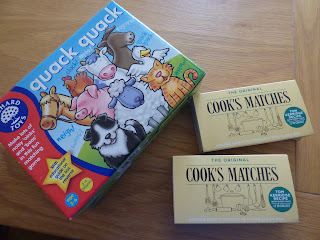 Another of the Orchard Toys games for a grandchild was the other £1 spent. As usual I could have spent lots more on games and toys, but I need to be sensible about what they really need and how much cash there is to spare.

I didn't bother with a Chinese take-away last Saturday after all  so my only spending on food away from home was one pensioners fish and chips and treating the family too when Eldest was here. Even meeting blogger Rachel-in-Norfolk for a cuppa in Morrisons turned into a cheap morning because their coffee machines weren't working - so no cappuccino - just a £1 tea instead (and a 30p doughnut - tut tut!)

How will August pan out? Well, in theory I don't need to buy any more books now the library van will be round each month  and they've let people reserve books again - at last,  BUT the Furrowed Middlebrow NEW SELECTION of reprints is out on the 3rd August and I might be tempted.

The half year water bill is due - that might be a bit more than usual. Sometimes the electric bill comes right at the end of August and it looks as if one of the cooker gas cylinders will run out  during the month too and I've just emptied the last of the petrol into the mower so that will need refilling.
Other than that it should be a lowish spend month..........I hope.

Have  good weekend
Back Monday
Sue