Nearly Normal Times? A Saturday Round Up.

A busier week  compared to the last 15, lunch at Son and Dil's, a shopping trip, a visit from the youngest two grandchildren - I also went to see Youngest Daughter and oldest Granddaughter - luckily I remembered the way to the coast after all these weeks!
Another job done was a batch of Lemon and Grapefruit Marmalade using a tin of prepared Lemon Home Cook Marmalade and a tin of grapefruit in juice. This makes a really tangy marmalade - I think it's my favourite.
Plus at last the front and side hedges are finished. I don't do the bit right at the end of the garden, it's more trees than hedge (and the extension lead won't reach that far) and I certainly can't do the huge hedge between me and the field. For one thing its just too high and for another it's where all the hedge sparrows live- it's a much thicker and denser Hawthorn hedge - than all the rest. It also doesn't have loads of brambles sticking out so I can get close enough to mow along the bottom.


Added to the food produced list this week were the first beetroot  - small but perfectly formed. 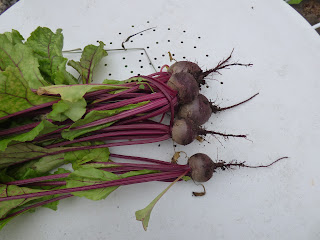 and a couple of pound of redcurrants - these went in the freezer - waiting for apples and I'll make redcurrant and apple jelly for me and for the Christmas Hampers. I made Redcurrant and Rosemary Jelly last year so want to do something different. 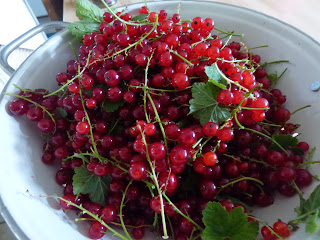 I also picked the first mange-tout peas which went into a stir-fry and then more to put in the freezer after a quick blanche. There won't be many to freeze but a few is better than nothing.

Now the question of the day  -Shall I go and look round the first car-boot sale tomorrow? It's the local small one rather than the Huge Needham Market boot sale which has been cancelled for the rest of the year.  I've read the website about strict arrival times for sellers and buyers and how they will have spaced the cars and put tapes up to make a one-way route for people buying - that's all fine but I have a feeling it will be crazy busy.

The updated food from home list (produced since March)

Have a good weekend - enjoy your first pub visit since March - if that's your thing!
Back Monday
Sue

Posted by Sue in Suffolk at 07:00
Email ThisBlogThis!Share to TwitterShare to FacebookShare to Pinterest
Labels: Being Grateful, Growing Food