Mid October, Then and Now

Short of ideas again so a look back at what I was blogging about in the middle of October in years gone by, a useful idea to remember whenever nothing much is happening

Does anyone ever ask you what you do when you are at home all day?

This is what I would tell them today.

I started by putting the eggs out for sale on the stand and then went round to let out 3 lots of chickens, give them fresh water and collect the first of the eggs. While I was outside, Him Outside was actually indoors lighting the Rayburn and having his breakfast, then putting the squash and pumpkins out for sale.After that he washed up while I wiped. Next I started the bread and while the dough hook was doing it's job peeled some cooking apples . Him Outside went out to take down the netting and gate from the front of the hay shed ( where we moved the chickens out of yesterday).

Then we had a coffee.

While the bread was doing it's first rising we got all the shed cleaned out with a nice lot of straw and poop wheel-barrowed around to add to the compost heaps.He finished the sweeping out of the hay shed while I went back indoors and made a batch of pastry ( It's OK I did wash my hands!). The pastry became an apple and a-little-bit-of-mincemeat pie, two baked blind quiche bases (one to eat and one to freeze) and an unbaked flan case also for the freezer. By which time the bread was ready for its knocking back and while it was doing its 2nd rise I baked the quiche bases, cooked the pie, softened an onion, pepper and courgette to make a filling for the quiche and washed up.
Him Outside was still outside but had moved around to the old campsite toilets to start emptying it prior to dismantling the inside.(It will in time be another chicken shed, if we can shift it without it falling apart!) While the bread and quiche were cooking I was sorting out all the things  that he had brought in from the loos, taking some clothes off the airer that's over the Rayburn and sweeping the kitchen floor.

Lunchtime and a sit down and blog reading.

After lunch he washed up then went off to borrow a large trailer big enough to put the tractor on and I wiped up,collected the eggs, picked raspberries, pulled up some beetroot, cleaned and boxed the eggs.
He got back, loaded the tractor onto the trailer and we had a cuppa. Then he was off again with the tractor to take it to get the hydraulics repaired ( properly this time we hope). I got some potatoes peeled and cabbage prepared and put the beetroot to cook on the Rayburn. Then I went outside to check the stand to see what had sold, check the chicken sheds for late eggs and to pick a few more cooking apples and bag them up ready for tomorrow.

He returned home again and after lighting the woodburner we watched Countdown on 4+1.( Some of the time he watched with his eyes shut - Not asleep he said!) He then sent an email to advertise the things we have for sale in the Suffolk Smallholders newsletter and I started this blog.

Time to go outside again to make sure the chickens have fresh water in their sheds before they go to bed and to bring in the things from the stall.

Dinner and Eggheads,Strictly takes Two,Washing up.Wiping Up. Shut up the chickens, University Challenge, Only Connect. Reading. Bed.
Another day gone!

Colin was spending some days in hospital after chest pains. This was a year after he'd been suddenly poorly and had stents inserted. He looks very well in this photo and although one blood test showed a heart attack there were no other signs and after a week in hospital having tests he was then home again.It was named the "Hardly a Heart Attack!"
The Thank-You is to all the blog readers who sent him Get Well Soon wishes 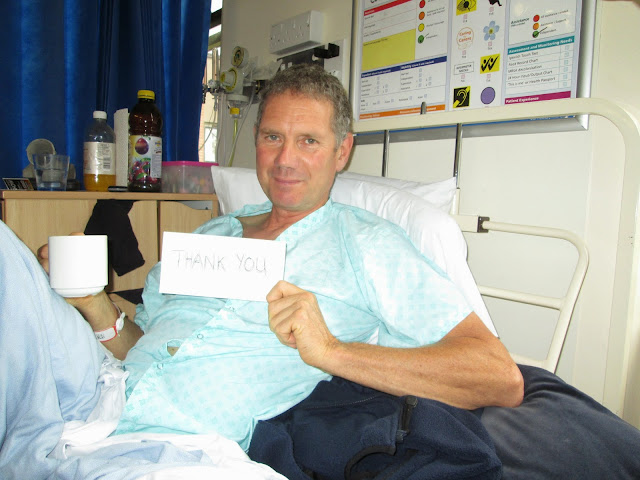 We'd been given some huge Quinces that we didn't really need, as we had some on our own trees, so I displayed them in an old basket on the windowsill hoping they'd give off a nice scent. 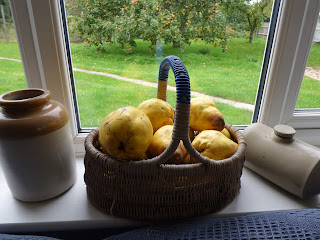 Plan A June 2015 - December 2015
Sell the smallholding, buy a small bungalow in town, use the caravan to visit all over the country, decide where to buy, perhaps Wales, and rent out bungalow in town.

Plan B January 2016
After diagnoses of Non Hodgkin Lymphoma, live in small bungalow in town until Colin has recovered then use caravan to travel and decide where to live perhaps Wales. Rent out bungalow in town.

Plan C  Suddenly October 2016
Spot lovely home  for sale in Suffolk countryside, abandon idea of ever living in Wales due to ongoing health problems, the wet weather there and arrival of 2 grandchildren. Make a cash  offer on house - which gets accepted. Put small bungalow on market.
All family cheering that we are not going to Wales.

Yes, after just 7 months in town we are heading back out into 'the sticks'.

We hadn't really planned to move again so quickly but when we spotted a house in Mid Suffolk on t'internet that looked really interesting, we went to look and it was just what we wanted. The sort of place we were looking for in Wales but without the rain and the hills!

So we are going to ignore the fact that Colin might have to have donated stem cells and more months of treatment. We shall ignore the fact that buying the house means we wipe out all savings and we'll have hardly anything to live on until we sell this bungalow and Col gets work pension in March 2017. We will ignore the fact that he may only be in remission for a short while and I could be on my own in the middle of nowhere and we will just go for it.
When it comes to house buying we've always gone with gut feeling (For instance taking 2 small children to live in a caravan while we restored a very old semi-derelict property in 1983 and moving across Suffolk to the completely run down smallholding in 1992)

We were at the Auction in Diss getting some trees for the "Birthday Wood". This is Col waiting to bid

5 Months after Colin died. I wrote about always  calling  Sumac "The Vinegar Tree" right from being little and having some in the garden by our play-shed and only finding out a few years ago that it's used as a spice with the flavour of vinegar. 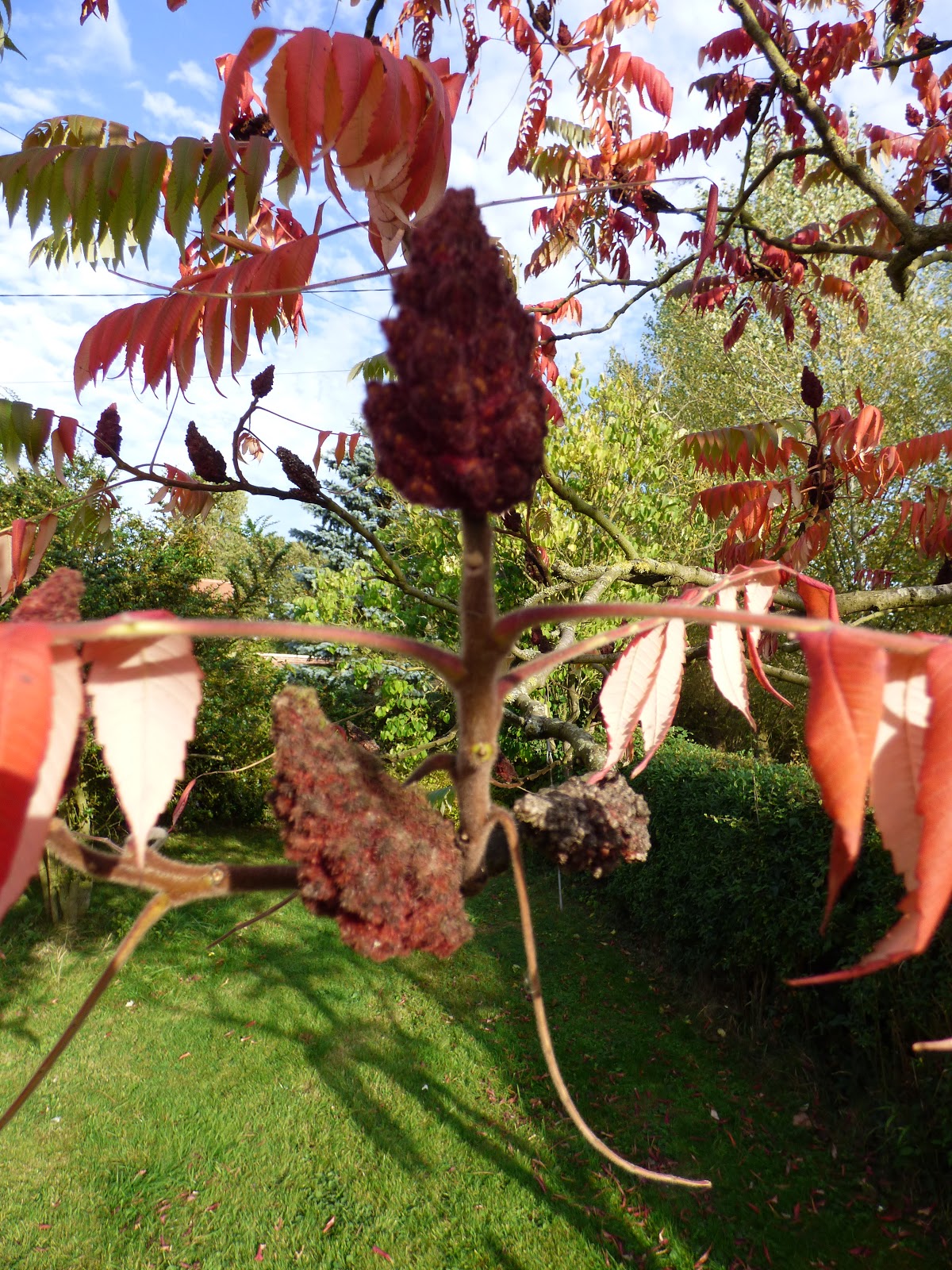 I picked up the Bee spotters guide at the Eye Green Fair. I put it somewhere safe to use this year for Bee spotting, somewhere so safe that I couldn't find it! 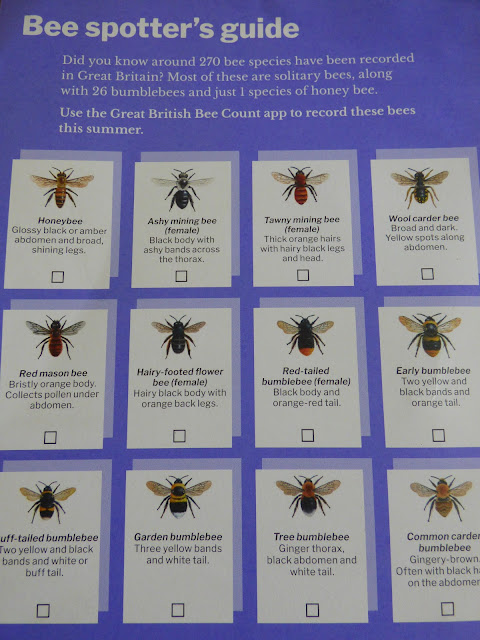 We'd talked about me being alone here and  I did end up on my own out in "the sticks".

Colin's Birthday wood isn't as big as it should have been due to 3 dry summers and it still shocks me to think that someone who had hardly had a day off work due to illness should  retire from work, have heart problems and stents put in and then get the dreaded diagnosis "treatable not curable" all within 6 years.

The Sumac or Vinegar  tree out the front of the house here is looking very sad, I reckon it's outgrown itself and only has leaves now on the tips of its few branches (another thing to get Brother-in-Law to cut down).

Looking at the photo of quinces I can see the old Bramley that we had at the smallholding still covered in Apples in mid October whereas on  the tree here this year the apples were ready and falling before the end of September.