Many Thanks to every one for comments yesterday. To start with when I tried to reply blogger was playing silly B*****s and all I kept getting was the error 503 note, but it worked OK later. It took me 5 go's to change the header photo too (Hope it was Blogger and  not my laptop or the fibre connection playing up).

One of the books ordered from the library and brought home in September was a new one by Anne Perry. She is an incredibly prolific author and since 1979  has written several long series of historical crime.

The book just borrowed is the second in a series set -  to start with -  in 1933 The main character is Elena Standish,  a young photographer who in Book 2 has just begun working for MI6.

I started reading 'A Question of Betrayal' but it kept mentioning things that had happened in book 1 and for the life of me I couldn't remember a thing about the earlier book. According to my Books Read 2019 page I'd read it in May last year..........quite a lot has happened since then!

Looking on the library website I found there was a copy of the earlier novel 'Death in Focus' available in the library at Leiston  - which by happy chance was where I was going last Saturday to deliver the birthday card and present to Eldest Granddaughter.

Now I've re-read book 1 and finished reading Book 2 and made sense of the two stories. Also made a note of the publication date of Book 3 - September next year. Hopefully when I start that one I won't need to go back and re-read both the first two all over again! 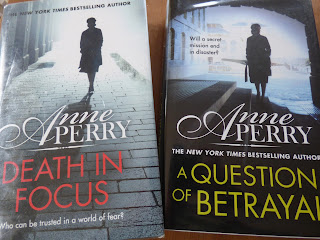 DEATH IN FOCUS .......It is 1933 and Europe is a place of increasing fear and violence. Young British photographer Elena Standish is on assignment in Amalfi when she meets Ian Newton, a charming Englishman with whom she falls in love. But what does she really know about him?

Accompanying him on a train across Italy to Paris, she finds him critically stabbed and dying. He tells her he is a member of Britain's Secret Service, on his way to Berlin to warn MI6 so that they can foil a plot to assassinate one of Hitler's vilest henchmen and blame Britain for it, thus causing a devastating diplomatic crisis. Elena promises to deliver the message. But she is too late, and finds herself fleeing for her life.

Meanwhile Lucas Standish, secret head of MI6 during the war, learns that his beloved granddaughter is being hunted in Berlin for murder. With Elena on the run, and at least one traitor in the British Embassy, it is impossible to know who to trust..

A QUESTION OF BETRAYAL.....On her first mission for MI6, the daring young photographer at the heart of this thrilling new mystery series by bestselling author Anne Perry travels to Mussolini’s Italy to rescue the lover who betrayed her.

Britain’s secret intelligence service, MI6, has lost contact with its informant in northern Italy, just as important information about the future plans of Austria and Nazi Germany is coming to light. And young Elena Standish, to her surprise, is the only person who can recognize MI6’s man—because he is her former lover. Aiden Strother betrayed Elana six years ago, throwing shame on her entire family. Now, with so much to prove, Elena heads to Trieste to track down Aiden and find out what happened to his handler, who has mysteriously cut off contact with Britain.

As Elena gets word of a secret group working to put Austria in the hands of Germany, her older sister, Margot, is in Berlin to watch a childhood friend get married—to a member of the Gestapo. Margot and Elena’s grandfather, the former head of MI6, is none too happy about the sisters’ travels at this tumultuous time, especially when a violent event at home reminds him that even Britain is growing dangerous. As his own investigation collides with his granddaughter's, what’s at stake on the continent becomes increasingly frightening—and personal.

Both are  excellent  - but best read in the right order.

All library books have now been read and its a week before the Mobile is round again so back to my own shelves.

Posted by Sue in Suffolk at 07:00
Email ThisBlogThis!Share to TwitterShare to FacebookShare to Pinterest
Labels: Book Reviews