Winter got here on Thursday, greenhouse looking like an ice house and car frozen up, so it was the first outing this year for the windscreen cover  which was a really good buy last year, saves running the engine to defrost the windscreen, which is what my neighbour does at 4a.m.! or scraping like crazy or having to buy that nasty de-icer spray stuff. Colin used to pour a jug of warm water over the windscreen of his works van - but that's not recommended and if it gets into the side windows it stops the electric window opener switch from working until the whole thing has dried out.....ask me how I know!

Finally got the Christmas cards (with notes written) into the post box, just in time as I'd not heard about the earlier posting dates due to the strikes. I just have one more letter to put with one more card and parcel and a few to hand deliver locally and that's the end of the cards. I've had 2 cards so far, one from WI and one from my penfriend on a windy Scottish Island - thank you W for beating everyone this year despite being so far away! (and thank you for pressie and the Robin who has been added to the tree!)

And I've nearly sorted presents. Eldest Daughter and Son in Law are getting a voucher towards a new hoover - boring but useful. She said they'll get it in the January Sales - "Good Plan" I said. Son had no idea really but then said he really needed to replace their utility room door so another voucher for a well known DIY store has been purchased. Again not very Christmassy but useful. Son gave me a good idea for Daughter in Laws pressie so that's sorted, which just leaves Youngest Daughter but as she is in the middle of moving house this weekend, and a move always means something is needed, I expect she will be grateful for some money. I'm a very lazy parent when it comes to buying presents .....it was much easier when they were little! Plus now of course there are also 5 grandchildren to puzzle over. 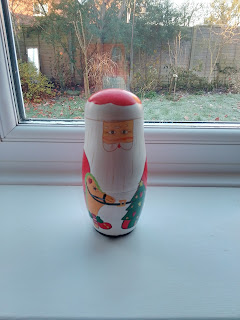 or actually these fellas, came from a Charity shop last month. 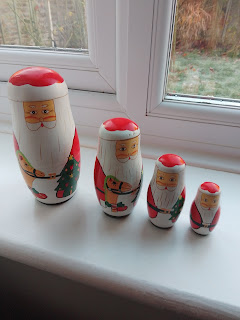 I felt a bit guilty because as I went into the shop a lady was looking at him, but then put it back in a box of lots of decorations and moved further into the shop. I swooped in and grabbed him and then heard another lady say to first lady "I'll have the Russian doll Santa's if you don't want them" by which time I was at the counter paying £1. I saw first lady go back to box to get him and of course he was gone! "Oh" she said "where's it gone?"

I was on my way out of the shop by then!
This is not my first set of nesting Santas, I had some many, many years ago. They stood on the mantelshelf at the smallholding every Christmas when the children were growing up until the heat from the wood-burner warped them and made all the paint flake off, by then the children had grown and flown and I expect the Santas were added to the fire!
My bargain charity shop buy is probably missing a larger Santa and teeny Santa #5 has been permanently stuck inside Santa #4 but for £1 I won't complain and the  two grandchildren who've seen them were still fascinated anyway.
I wrote about how Santa came to look as he does HERE in a 2021 post.
I've just tried to see more than the 10 most recent posts in my list of "Blogs I read" on the right and the Show More thing isn't working - which is a tad annoying. Hope it rights itself.
Back Tomorrow
Sue
Posted by Sue in Suffolk at 06:00
Email ThisBlogThis!Share to TwitterShare to FacebookShare to Pinterest
Labels: Advent Photos 2022, Charity Shop Finds, Christmas