When I was writing about the Maypole Pub on the May 1st post it reminded me of something we had across the road in our primary school playground in the very early 1960s.

A lethal bit of kit that must have caused numerous injuries although I can't remember any.

This picture was found (after I googled "playground maypole with chains") on a short lived blog called 'Thus sayeth the bitter old bitch'........brilliant name ..........  dating from 2009. Hope the b.o.b doesn't mind me borrowing it. 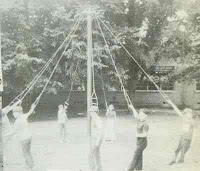 The b.o.b describes it thus.......
"The Octopus was a simple design. A huge metal pole in the ground, with attached  chains, allow the chains to swivel from the pole. Add kids, and you're done. Simply put, everyone grabbed on, you ran around as fast as you could until...LIFTOFF! Of course, half the time the sucker would throw you ten feet if you couldn't hang on, and you could be certain that someone or another  chain next to you was going to slap you in the face, and you were possibly going to slam right into the pole itself. With excitement and danger like that - it really is little wonder why we played all day long."

Until the council bought the field adjoining the school we only had a small tarmac playground and a bit of rough grass and weeds and I remember this chain maypole being on the rough ground. It was something mainly for the Big Boys and Girls in the top class - there were only 2 classes! They would run as fast as possible and then swing their legs up to grip the chain....somehow. By the time I would have been old enough to have a go it had gone from the playground to be replaced by an equally lethal tall metal climbing frame over a sand pit.

The school closed several years ago and was used as a nursery school for a few more years but is now up FOR SALE  .


Posted by Sue in Suffolk at 06:00
Email ThisBlogThis!Share to TwitterShare to FacebookShare to Pinterest
Labels: Memories