Our county show has been held on the Wednesday and Thursday of half term week FOREVER! and we are always being told it's one of the best in the country as it has kept it's true agricultural roots.

We used to go quite often when I was a child and took our own children a few times. Once we had the campsite we were usually busy at home through half term week so I'd not been for maybe 15 years, since Colin got me a Day Member ticket for my birthday. That was a good visit as members get into a special enclosure close to the Grand Ring and use the posh loos!

Anyway, I decided to go this year, it's something I'm happy to go to on my own......no one to dictate what stands to look at or to decide when to arrive or leave. My only worry was losing the car in the car park among the many thousands of other cars. You wouldn't believe how many small silver-grey cars there are in Suffolk!

My plan was to arrive early, just after 8am and be close to the front of the car park and I was waved into a space right on the end of a row - no problem losing the car there.

I got the show guide from Brother in law last week when it was free with his East Anglian Daily Times (he gets in the show for free......lucky thing..... because of his 40 years Suffolk Agricultural Association long service award with the farm he works for) and found that if I got a EADT goody bag on my way into the showground - for £1 - it would have a newspaper, a bottle of water and some edibles - bargain! 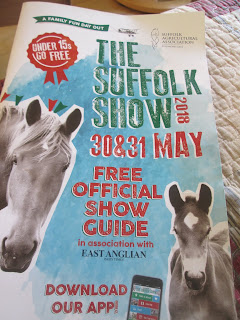 I made a note on the map of the stands I wanted to visit because I like to see how many free cups of tea/coffee I can find!

Also noted down the times of the show jumping which I wanted to watch. So first stop The Grand Ring at 8.30 for the "The Welcome Stakes".

I would have liked to take my big camera but it was too big for my bag and I wanted to 'travel light' so it was the little Canon with the blob on it's lens! 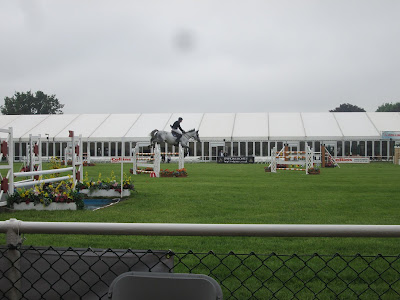 I watched all the competition and then started to wander. This is one of the big ol' helicopters that flies over home sometimes. 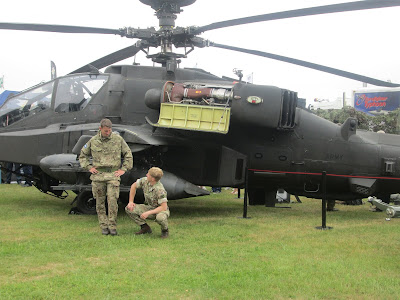 Time for a free cuppa and  free cup-cake with entertainment by the Co-op Brass Band in the East of England Co-op tent.........just by showing my Co-op card. 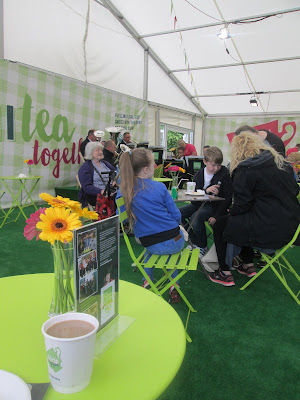 And more wandering took me through all the stands selling posh country clothing, jewelry, hats, horsy things, doggy things, hunting shooting and fishing things and round to the sheep tent, some being judged here. 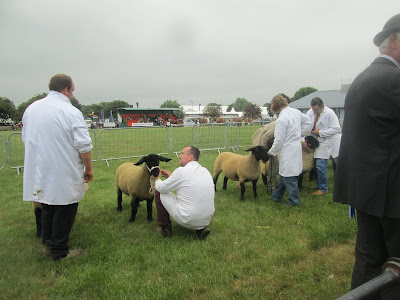 I popped into the goat tent but as always no-one there to speak to, no information about goats, not even anything on each pen to say what breed they were or who owned them. No wonder the BGS are short of members .....(it's something that annoyed me way back when I wanted to know more about goat keeping!....Nothing has changed)


Back to the Grand Ring to get a seat for the next showjumping and I arrived in time for the heavy horse pairs turnouts. They come from all over the Eastern Counties and further afield for this competition. 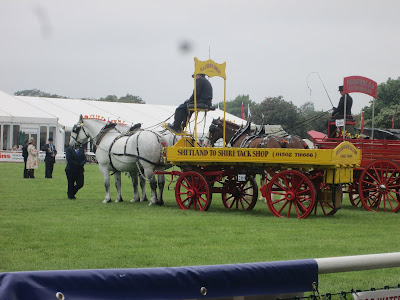 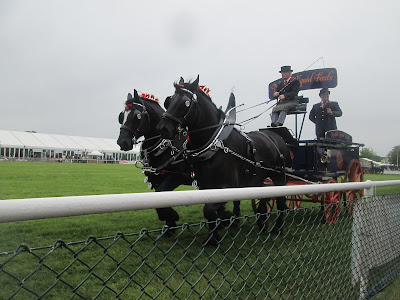 It takes hours to get them ready.

Then the 'International Trial' Show jumping was a good competition. Only 4 clear rounds out of over 20 entries. Top 5 come back for a second round against the clock and only one clear round which took the top prize of £2,000 - I think.

With 2018 being the 100 year anniversary of the ending of WWI there were several displays. This is a re-creation of the FANYS. (First Aid Nursing Yeomanry.A rather select higher-class organisation that had existed since formation in 1907, the FANY worked with the Red Cross organisations, principally as ambulance drivers. There were just fewer than 120 members of the group in France in August 1918. FANY went on to survive another war and indeed still operates today, (SEE HERE)although the nature of its work and the make-up of its staff has changed somewhat since 1918.) 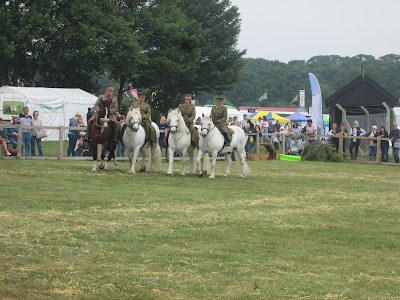 Posted by Sue in Suffolk at 06:00
Email ThisBlogThis!Share to TwitterShare to FacebookShare to Pinterest
Labels: Local Events, The Suffolk Show