and  a car boot sale without chaos.

Saturday morning, I got Col sorted with a high calorie milk shake, washed up and headed out early.

Thankfully he is still able to get himself dressed and come downstairs. I'll be nice and early at the car boot sale...........I thought. Arriving at 10 to 8 there was already a sign out saying 'No More Pitches Available' and the car park was chock-a-block. I squeezed into parking space and started to look round but the organisers had put the rows of sellers so close together and with so many people trying to look it was difficult to see anything properly. I didn't find much and decided to abandon the sale about half way round......and then the fun of trying to get out of the car park! Ha! Dozens of cars trying to get out while even more were trying to get in and find a parking space. About half an hour later I was finally out, gave up plans of visiting Needham Market church and went to Tesco via the main road rather than through the town. Tesco was also heaving.

I though how funny it was that my parting words on Saturdays post were " avoid the traffic jams!"

All I found amongst the mountains of STUFF on Saturday........... book 50p, glove puppets of the "This little piggy" rhyme 50p, unopened cling film 50p and packet of Nasturtiums for next year 20p. 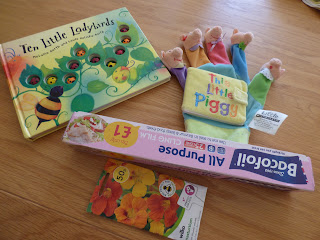 I also got 2 cucumber plants to replace mine that collapsed, both F1  plants, one 80p and one was £1.

The Sunday car boot is 3 miles nearer, not so busy and much better access...... so no traffic jams!
I went early again and found these 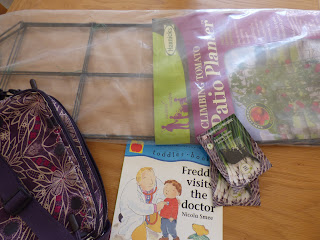 A 3 sided frame for climbing plants was £3, 2 packets of spring onion seeds 50p, yet another book for grandchildren 50p and a colourful shoulder-bag for £1.50.
Then home again by 8.30am for a much needed coffee.

I spent the rest of Saturday and Sunday alternating between bits of housework, sitting outside in the sun and watching the semi-finals of the World Snooker Championship on TV. Because of Col being poorly we've seen more of it than we usually do (it's on 3 times a day for 17 days, which must be hell for anyone who doesn't like it but is forced to watch!) and there have been some good matches.

We didn't get to the Middy at War event yesterday, didn't even hear the little steam train chuffing, what breeze there was came from the other way. We did see the Hurricane do a flypast, three loops and he'd gone back to Lincolnshire! Wonder how much they charge for a minutes flypast?

I'm feeling ancient today...........eldest daughter is 38......how did that happen? That's already a year older than I was when we moved to the smallholding........ which seems like only yesterday.
Happy Birthday Helen!

Back Tomorrow
Sue
PS Thanks for comments on Saturday's post


Posted by Sue in Suffolk at 06:00
Email ThisBlogThis!Share to TwitterShare to FacebookShare to Pinterest
Labels: Car Boot Bargains