Another post that has been sat in Drafts for  weeks and now its only a week until the library van will be round with my June books!

Collected from the library van 3 weeks ago were lots of crime, four are reprints by forgotten authors. 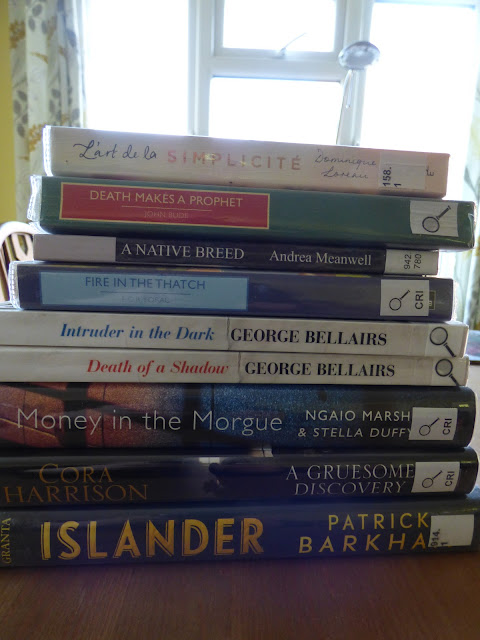 I find crime are my easy-to-read choice when I can't concentrate on non-fiction.

I've read 4 of the crime so far and flicked through Simplicite.
'Money in the Morgue' is interesting as it's a book started by Ngaio Marsh before she died in 1982 and finished by Stella Duffy just recently........ You can't see the join.

I must have a look at Islander as the author is at Felixstowe Book Festival next month and I need to decide if I should go and listen to him talking about it or not.


More things were sorted yesterday..... first with the chaplain, then at the bank and at the florist. More forms filled in and posted.

Had a letter from electric supply company telling me my meter is old and they "need to replace it with  a smart meter". But as I would have to pay for the phone call to either arrange an appointment or to say I don't want one I shall ignore the letter until they contact me.......why should I pay (even if it only pennies for a phone call) when it's something They want to do!

And Her Maj's Revenue and Customs are on the ball, they soon sent a letter wanting to work out if enough tax was paid before Col passed away or maybe too much? Hopefully the latter.


Back Soon
Sue
Posted by Sue in Suffolk at 06:00
Email ThisBlogThis!Share to TwitterShare to FacebookShare to Pinterest
Labels: Library book photo