The post lady brought me a parcel, it arrived on the morning that I had been called into hospital. I had no idea what it was. There was no clue on the outside and I wasn't expecting anything. 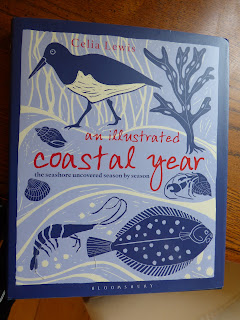 Then I dashed off to Ipswich hospital and it was a couple of days later before I got to open it and found this book.  Nothing inside to say where it had come from except it had been sent from a company called Wordery, not a company I've ever used so I hadn't somehow ordered it by mistake!

I'd given this book a mention on the blog on the 1st May when I showed the photo of an illustration from a book by the same author called The Illustrated Country Year which I'd found in a charity sale in the Library in Ipswich and I said I'd like to find a copy of The Coastal Year sometime.
There are only a few people who read my blog AND know my address? But would they suddenly send me a book? So it's all very, very strange.

Now I love a good mystery story and who-done-it  but they are usually resolved at the end of the book.

But this time I haven't a clue!

Many Thanks for comments yesterday about gardening. I have lots more to do over the weekend.

I've now been to the solicitors ..... Another errand ticked off the list. Still a few forms to fill in and send off.  Next week it's a meeting with the Reverend who is going to lead the funeral service and a day out  which will be good - lots of photos will be taken for the blog. Apart from gardening I'm not sure what else is happening over Bank Holiday weekend, probably a visit to see Son, DIL and Willow as there is a Flower Festival and Family Fun Weekend in their village, car boot sales for sure and the French Open Tennis starts on TV....the start of my favourite month of wall to wall tennis.....French Open, Queens club and Wimbledon.

Back Tomorrow or Monday
Sue
Posted by Sue in Suffolk at 06:00
Email ThisBlogThis!Share to TwitterShare to FacebookShare to Pinterest
Labels: My Books