Another Good Week in Suffolk

Walking on Monday morning was lovely - cold but not too cold with blue sky and sunshine.

Cycling a couple of miles on Tuesday morning was chilly but sunny although the wind  and rain got going later. Just after 10pm there was a torrential hailstorm - on the back of the house, yet the rain earlier in the day had hit the front of the house.....weird.

Wednesday the electric was supposed to be off - a planned outage for tree cutting near wires  somewhere, cancelled from before Christmas, so I decided to have a day out........charity shops and churches (and a very strange meal in Dobies Garden Centre where a salad consisted of  2 cherry tomatoes and 3 slices of cucumber!) There I bought some bulbs for colourful Gladioli 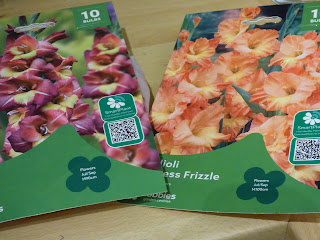 for my mini cutting garden to replace some of the Hollyhocks - which turned out to not be good for cutting as they have to have the stalks filled with water to stop them from collapsing in the vase. When I got home I found the electric hadn't been off at all. Which means we'll probably get another note through the door again sometime in the future......

Thursday I went to help at a 'Soup and Puds' WI fundraiser. This is at big WI, they've been doing them twice a year for years but I'd not gone and helped before mainly because I didn't really know what it was. So I volunteered to help with washing up.....safely in the kitchen - out of the way, while I discovered exactly how the event worked. I ended up not doing much washing up but generally helping in the kitchen and then dishing up some of the desserts. People have to buy a ticket in advance  for £6, turn up at the village hall at 12 noon and then  get a choice of 3 soups with bread rolls, they can come back for second helpings. Then a choice of about 9 different yummy desserts, followed by coffee and  a mint. I can quite see why Colin's Dad used to like going to this event before he died. There is a Bring and Buy stall and a Draw (of course). There was enough soup and desserts for all of us in the kitchen to have some too.
I began to think I wouldn't get there as two roads were closed in two different directions, which I didn't know until I got to the 'Road Closed' signs, and I ended up taking nearly 45 minutes to do what usually takes  under 20 minutes!

On Friday I started a 12 week course run by OneSuffolk - " Lose weight with your FREE  local weight management service"............I'm not hopeful.
But  more importantly I welcomed Eldest Daughter with Eldest Grandson (heavens above he's nearly 4!) here from Surrey to stay for a couple of nights, mainly for Auntie H to meet her new nephew and for J to meet his new cousin - although he probably wasn't that fussed as he's got boy cousins big enough to play with on his Daddies side of family already and near enough to see often.
I decided not to bother with organising the picking up of my library books at a different place, so will just wait until the van's round again and carry on reading from my own shelves in the meantime.


My Being Grateful thoughts this week were easy

By this time last year I had done lots of garden clearing, the weather had been warm and I had seeds sown in the propogator ..............This year it's just been wet and virtually nothing has been done.

Hope you all have a lovely weekend
Back Monday
Sue

Posted by Sue in Suffolk at 07:00
Email ThisBlogThis!Share to TwitterShare to FacebookShare to Pinterest
Labels: Being Grateful, On My Bike, One Life Suffolk Weight Management Course, Walking, WI