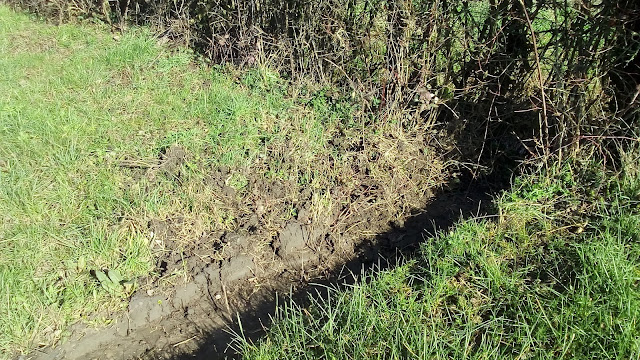 Back then all these roadside drainage channels - for that's what a Groop is - were dug by hand. Now they are done in quarter the time by a tractor with a small digger shovel. They've all recently been dug out where I was walking the other day.

I thought it was a word the blokes who dug them had made up and it certainly doesn't appear in the Shorter Oxford Dictionary but it is in my little book of Suffolk words. 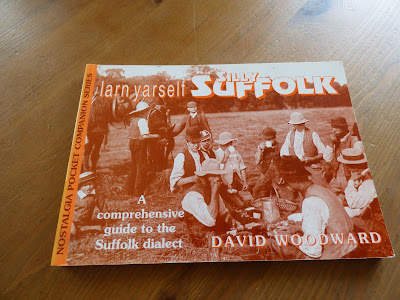 I've written about Suffolk dialect once before on this blog HERE, and on the old blog too a long time ago when I found people didn't 'get' the ironic sense of humour Suffolk people often use and our way of using language not quite as intended.

So a "bit windy" means blowing a gale and if  someone asked me how many people were at a a big event and I said "quite a few". That means lots, even hundreds!
We use the word 'stuff' too much. For instance we would say I got some stuff from the doctor, instead of medicine.
If I said to two people " have a good Christmas together" it wouldn't mean "have a good Christmas TOGETHER" but "have a good Christmas both of you".
The word " daft" doesn't really mean stupid but is just slightly silly or even a term of endearment!
"Funny"  doesn't always mean hilarious or even slightly amusing and "Owd" (old) doesn't necessarily refer to age. We say "Thus a funny owd day today int'it?" ( it is a funny old day today isn't it?) Which means that the weather is a bit odd or odd things have happened.
We say "Ours" or "mine" to mean our home and "yours" is your home.
We say "shew" instead of showed. The word "that " often replaces "it" and if we say " clever" it probably has nothing to do with intelligence. So "he in't too clever" means he is at deaths door!


We're proud to be a bit odd over here in East Anglia!

What's a 'groop' called in your part of the world?

Posted by Sue in Suffolk at 07:00
Email ThisBlogThis!Share to TwitterShare to FacebookShare to Pinterest
Labels: Suffolk Dialect