Reading From My Shelves

Due to having 9 books for Christmas and always finding secondhand books wherever I go AND very few library books I managed to read a few of my own books. 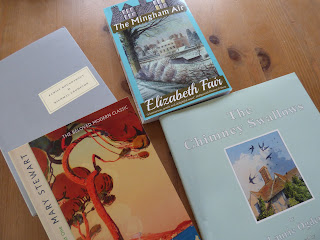 Elizabeth Fair - The Mingham Air. Fiction. (A Furrowed Middlebrow Reprint 2019 Originally Published 1960). A gentle story of the characters in a village and  newcomer Hester who goes to convalesce with her Godmother and sets about organising everyone.

Mary Stewart - The Wind Off the Small Isles/The Lost One. Fiction Novella and short story. (Originally published 1968 and 1960, reprinted 2014). A Quick read with both stories featuring the same young woman - intrepid survivor of cliff falls on Lanzarote and escaped prisoner on the Moors.

Laurie Ogden - The Chimney Swallows. Children's Fiction. (Published 1999). The author and his family live in an old house where swallows return every year to nest. One summer his son John has to spend a lot of time in bed and the swallows nest right inside his room. But then comes the year where the swallows don't return.

Richmal Crompton - Family Roundabout. Fiction. (A Persephone reprint originally published 1948) Richmal Crompton was much better known for a children's books about William. She also wrote many adult books. In Family Roundabout we are shown the matriarchs of two families, and the ups and downs of their children and grandchildren in the years between the wars.The families are linked by marriage and there are other marriages, none of which are straight-forward and happy, but still a good story capturing the time.

I'd like to read more from my shelves but also love to have new books from favourite authors from the library although I found I'd forgotten to order the new Elly Griffiths book "The Lantern Men". Added myself to the waiting list........... 378th!! Might be a while.


Posted by Sue in Suffolk at 07:00
Email ThisBlogThis!Share to TwitterShare to FacebookShare to Pinterest
Labels: My Books