I got there earlier than last year so was very near the front of the queue, only a dozen people in front of me and 100 behind 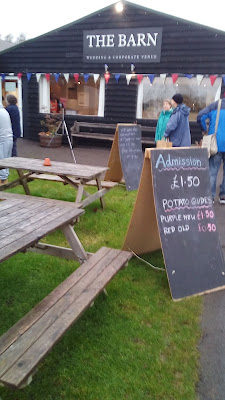 As it was the 25th anniversary they had invited Bob Flowerdew, organic gardener extraordinaire, who's often on Gardeners Question Time on radio and used to appear on TV too, to open the event.
Blimey he looks older - he used to always have a long plait down his back, but now just a top-knot and beard.
Here's a blurry photo of him with microphone, encouraging everyone to grow more spuds. He says the secret for Norfolk and Suffolk potatoes is as much watering  as possible, which is all very well, but I have enough watering to do with the greenhouse stuff plus the beans, squash and courgettes. 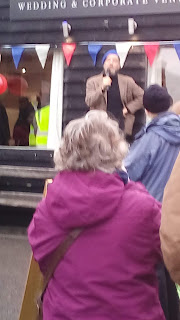 I just bought a few Home Guard and Foremost and  more of Charlotte - my favourite. No point taking up my limited space with too many as I don't eat a lot of potatoes nowadays, but it would feel strange to grow none at all.

As well as about 80 varieties of potatoes there are other stalls too and I managed to nab another free jute bag from the Local Councils Recycling Stand- even though they said last year they wouldn't have them again. 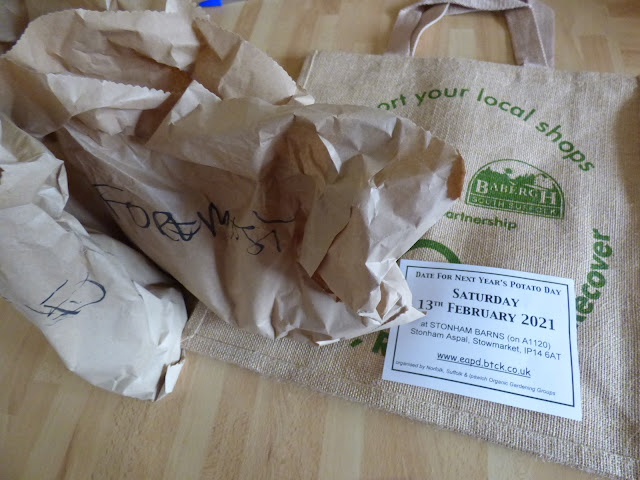 I was tempted by this.......so tempted that I bought it...............a small pottery bowl from a lady called The Vegan Potter, mostly she does one-off unique pieces. This bowl has a lovely glaze - a beautiful colour. Not sure what to use it for though. Sure I'll think of something. 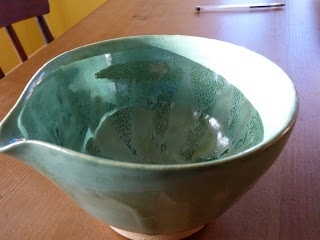 I also loved this bigger bowl below and took a (poor) photo of it especially for Joy. It's made from small squares of clay all overlapping slightly and shaped in a mould (a bowl lined with something - newspaper? can't remember what she said), It looks amazingly complicated. 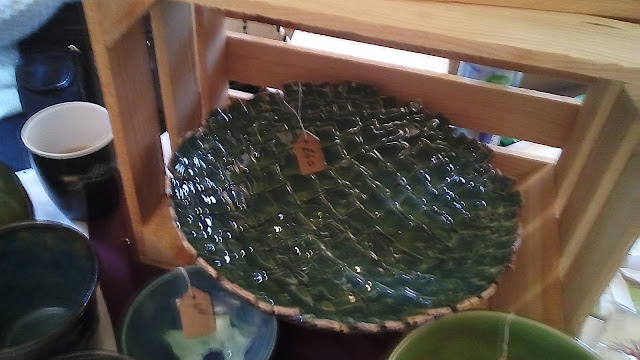 So now I have my seed potatoes and my seed packets and called into a garden centre after Stonham  for my compost.............I'm ready for growing - just need the right weather.

Back Tomorrow
Sue
Posted by Sue in Suffolk at 07:00
Email ThisBlogThis!Share to TwitterShare to FacebookShare to Pinterest
Labels: Potatoes