In medieval times the weather on the 28th was thought to predict the next 40 days and often marked the end of any mild spell with colder and windier weather moving in.

This year we seem to have already had the windier weather and much rain but relatively mild so far.

Saints Simon and Jude were two of Jesus's first 12 apostles. Simon  is often called Simon the Zealot - probably to distinguish him from Simon Peter and Jude is thought to have been either a relative of Jesus, perhaps his brother or a brother of James.
There are two stories about Simon's end - either he was killed as a Martyr in Persia or he died peacefully in Edessa in Greece.
This is Saint Simon as he appears in my saints book 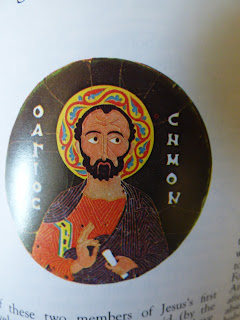 Jude is mentioned 4 times in the New Testament
Saint Jude is often said to have been killed at the same time as Simon. No painting of St Jude in the Saints book.
Back Tomorrow
Sue
Posted by Sue in Suffolk at 07:00
Email ThisBlogThis!Share to TwitterShare to FacebookShare to Pinterest
Labels: Saint's Days