Monday was exciting, not because of my trip to Morrisons for shopping but because I spotted my first ever Treecreeper. All because I forgot to post a letter on my way out and all the time I was out, so turned into our track and stopped to post it on my way home again and when I got back in the car something in the tree beside me moved and caught my eye, and it's white front was much too white for anything else and by the way it was moving at great speed up the tree trunk it just had to be a  - Treecreeper!
Photo from the RSPB  website 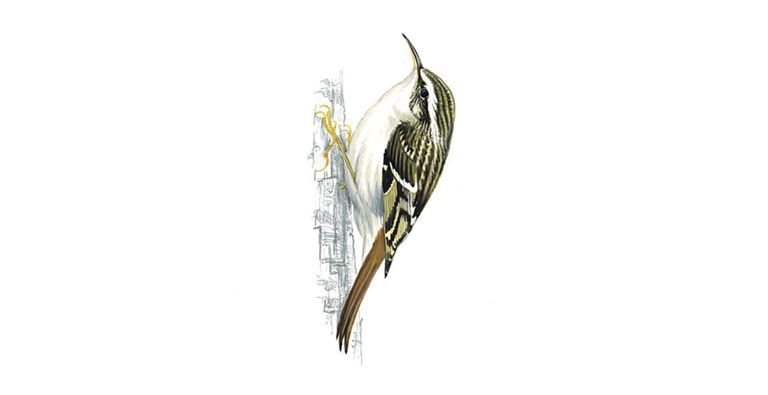 They aren't that uncommon, but just difficult to spot.
It's the RSPB Great British Garden Bird watch at the end of the month, I'm no good at sitting still long enough so won't be doing it myself plus I've only got fat-balls out for the birds at the moment as I didn't want to order any other wild bird food until after the move.
It's surprising how garden birdlife varies so much. At the smallholding we often saw lots of Goldfinches and Long Tailed Tits and we did here until magpies started nesting in the top of one of the poplars on the meadow in 2018. But we never saw house sparrows there whereas here they are everywhere all the time.
Also interesting to note that years ago spotting a Kestrel hovering would be something to remark on, now it's unusual not to see one perched on the wires or hovering by the road edge. And I can remember how exciting it was when we first saw Buzzards at the smallholding and again now it's quite common to see one lifting off from a field or perched in a tree whenever I'm out.
The bird that's now rarely seen is a Song Thrush. Years ago you could often see the remains of a snail shell where they had been bashing it. I don't think I've seen one here at all.
Back Tomorrow
Sue
(has the delete button for comments disappeared on other blogs, or is it just me? Annoying if it's been removed - means no way to get rid of published rubbish.)
Posted by Sue in Suffolk at 07:00
Email ThisBlogThis!Share to TwitterShare to FacebookShare to Pinterest