Not much to round up this week. I delivered the things that had been here in a cupboard for 3 years back to their owner, chatted to the window cleaner for a few minutes on the doorstep, Brother in Law rang one evening and that was about it for social interaction!
After snow and gloom last Saturday there was blue sky and sunshine last Sunday, which was good as I'd been waiting for a fine day to defrost my small freezer,which lives in the back porch. I'm leaving the big chest freezer in the garage as it's very old and has been moved  twice already, which really doesn't do them much good and it will take up too much room in the small garage at the bungalow. I won't need so much freezer space in future as there won't be fruit to freeze and I'll be closer to a village shop.
Defrosting the little freezer means hauling it out of the back door so the ice melt doesn't make a big puddle - hence needing a fine day. Another job done.
After a couple of dry days it was back to rain and windy weather again before a fine Friday.Thankfully  we didn't get the storms and rain in Suffolk that have caused so much flooding in the North and around Manchester. Huge problems for everyone advised to evacuate .........where do you go in a pandemic?
On Wednesday I wrote about enjoying reading British Library Crime Classics and most have been good. Some are not so good. The one I've just finished was rubbish! It was "The Woman in the Wardrobe" by Peter Shaffer and first published in 1951. An amateur detective helps the police find a killer in a seaside hotel. I skimmed over the last pages just to get to the end. This is the first by this author that they've reprinted, if they do more I won't bother to borrow.
Box packing is going along steadily, one or two each day and some bits are heading to the bin instead of into a box. I'm sorting the craft room/office now and have decided to leave my small desk for the children who are moving in - if they want it, as I'd rather have my bigger table that's currently in the living room here to use there. The bungalow isn't huge but the main bedroom is big enough to have my craft and office space at one end.
16 boxes in the dining room so far and more upstairs in the bedrooms and craft room and a couple more in the living room. Beginning to wonder if it will all fit in the bungalow!! 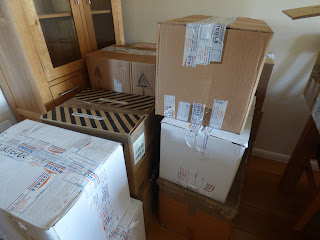 I'm not holding my breath while waiting for over 65's turn to be vaccinated here in Suffolk. They've only done 36% of over 80's so far compared to 80+% in other parts of the country. No one has come up with a definitive explanation on why we are lagging so far behind. I suppose they'll catch up eventually.
This week I'm Grateful for
My adventurous weekend will include a trip to the Post Office and a visit to the two youngest grandchildren and their Mum and Dad of course, I'm managing to pass 4 items from the cupboards/garage on to them too................whether they want them or not!
Have a good weekend, I'll be back Monday
Sue
Posted by Sue in Suffolk at 07:00
Email ThisBlogThis!Share to TwitterShare to FacebookShare to Pinterest
Labels: Being Grateful, Moving House