January Round Up - The Ins, Outs and Frugal Bits

The new header is my house from across the field in front......... on a cold and frosty morning during the week. Since swimming stopped in December I've got very unfit so started with short walks of a mile and this spot where I stopped to take the photo is half a mile from home along the road........it's too muddy to walk the footpaths across the fields. A mile sounds rather pathetic but it's just about better than nothing. 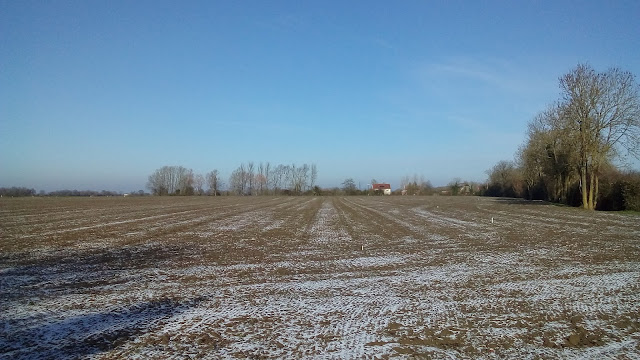 I know I'll be much better off financially after moving (the Council tax will be at least £40 less each month for a start)  but actually getting there is expensive...... I'm expecting February and March to have very high outgoings so it's a good thing January wasn't too spendy.

Eating my way through the freezer stocks has meant I've only bought fruit, veg, milk and things I don't like to run out of. I had one pensioners Fish and Chips bargain lunch at £3.50. Other spending included a present ready for Youngest Grandsons 1st Birthday and un-birthday lock down gifts for the other grandchildren. Then there were the usual direct-debits and exciting house things -like a new mop!
The sewer pump out was £109 - that's a £10 increase from last time. I've also paid deposits to the solicitor for the buying and selling work. A couple of times this month I've treated myself to The Radio Times, I like all the other information apart from the TV schedules. The Saturday East Anglian Daily Times has a weeks TV listings but their print size (apart from the main channels) is so tiny, that it's almost impossible to read whats on.
I've also paid for 500 litres of heating oil as I don't like to see the tank getting too low and the weather could be really bad between now and moving. The price of heating oil has gone up from it's very low point last May but still not as high as pre-covid levels.
I sent some more books to Ziffit early in the month but I've gone right off them because books that were worth something when I registered them were rejected because of "Expired" - not my fault they took a week to get there with Hermes and another week to be unpacked. Very annoying. From now on they will be donated to a charity in one way or another as soon as things are back on track......Autumn? As we've now been locked down until March 8th at least - can't see much happening until late summer.
January Income was the usual County Council Spouses pension, income from savings, £13 from the scrap-yard and £7 from Ziffit.
The frugal things were as usual.............
The biggest excitement of the week was a trip to the Recycling Centre (AKA the Tip). I cleared out the rusty topless and bottomless dustbin I used to force the rhubarb - while I knew what it was for it would look like junk to anyone else. Small electricals and random wires and cables went and some old plastic boxes and two mouse-eaten sleeping bags - used for lagging the big freezer in power cuts- no longer my problem.
Next weeks excitement is  Youngest Grandsons 1st Birthday lunch and cake. Plus picking up my prescription meds. from the doctors pharmacy - which will be sure to include another Pensioners Discount Fish and Chips meal........... ......what an exciting life!
When I move I'll be able to walk to the doctors AND the fish and chip shop............. or bike so I can get home with them still hot.
Have a good weekend, I'll be back Monday.
Sue
Posted by Sue in Suffolk at 07:00
Email ThisBlogThis!Share to TwitterShare to FacebookShare to Pinterest
Labels: Frugal Month Notes