I've recently finished the second in a series by Rory Clements. What a good writer he is. 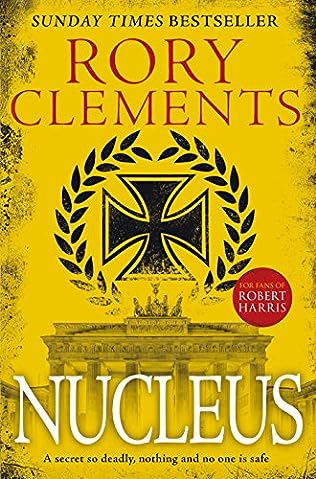 Set in 1939 in Cambridge and Germany on the eve of war and featuring  the American History Professor Tom Wilde and his friend and neighbour Lydia Morris.

Tom Wilde, a History Professor at a Cambridge College has been lecturing and visiting his mother in the USA and  finds himself invited to the Oval Office to meet President Roosevelt and a member of the War Office. Wilde is asked what he knows about the science behind atomic fission and then asked to find out from his colleagues in Cambridge how far they have got in preparing a possible  bomb  and report back . In Germany there are people doing exactly the same - the USA wants to know who is nearest to making this deadly weapon.
He returns to his university in Cambridge to find Lydia, a Quaker, is in London assisting with the housing of the Jewish children who are hurriedly being moved from Germany to safety in Britain following the events of Kristallnacht 7 months earlier.

This is a fast paced book moving from the rich and famous partying at their country house to the scientists closeted in the laboratories and then to Germany where no-one is safe from the Nazis and anyone could be a spy. Add in the IRA who are bombing targets in Britain to destabilize the government, people who are not what they seem, the beautiful buildings and colleges of Cambridge  and you have a fascinating story.

To remind myself about the characters and story line I re-read "Corpus", the first book about Prof. Wilde, just before this new one arrived from the library. Now I shall look forward to the third which hopefully will be published next year.


Posted by Sue in Suffolk at 06:00
Email ThisBlogThis!Share to TwitterShare to FacebookShare to Pinterest
Labels: Book Reviews