A Week Flies By

It's been a busy week, rushing toward the end of April. Good thing my posts have been short or pre-prepared.
Monday morning Col had a hour of being well enough so that we were able to finish cutting a pile of odd bits of scrap-wood to add the the wood shed but since then he has been really rough. Mainly due to not being able to eat much because of the sore mouth then add in new chemo tablets and antibiotics for the chesty cough and a tablet mixture destined to make anyone feel sick and tired.
On Monday night I bit a piece of chocolate that had been in the fridge and broke a tooth.Serves me right for being greedy! Luckily the tooth is the only one that has had root canal done so it doesn't hurt at all.

Tuesday I took the bundle of boot-sale summer clothes over to Florence. Her mummy thought it very funny as I unpacked each item and showed them to Florence....."Pink top?", "Stripey shorts?", Flowery top?"
She nodded at some but shock her curls at others! Then she got busy moving the pile of clothes from table to chair and then back to table again....... easily entertained.
After that we settled down with two books - also boot sale treasures. She does like a new book to look at.
Here is our poppet enjoying a small piece of fruit tea bread - she eats anything and everything, easily fed too! 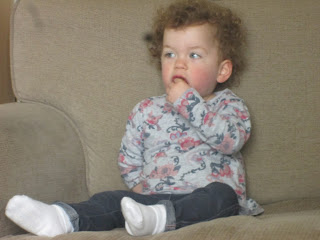 Wednesday morning we went to Stowmarket and I dropped Col off at the solicitors to meet his brother and sister. They are doing more to sort out his Dad's will. His Dad died last July and it's taking an age to sort. While he was there I rushed round Asda for shopping. The lady on the till said have you got your car-park voucher? and I realised I'd forgotten to put money in the machine!........thank heavens no parking attendant had been round and given me a fine.......phew .....lucky escape.
Once home I then had to go out again to the dentist, luckily they'd had a cancellation so I could have a check up and he could sort out what to do with the broken tooth. EXPENSIVE is the answer to that one. I will try and find an NHS dentist again after I've had this course of treatment but I'm not hopeful, it could mean  traveling miles which seems silly.
Wednesday afternoon was housework

Thursday the sun was shining but the wind was cutting. I got all the wild flower modules planted on the meadow, weeded the asparagus bed, planted the rest of the sunflowers, sorted out the things in the greenhouse - 3 courgettes seedlings have appeared at last, re-potted my Lemon and Calamondin plants (can't call them trees yet as they are only 18 inches tall). I used multi purpose compost but have a nasty feeling I should have got some special compost for citrus.
Then I put compost on the bit of the cut flower garden where the sweet peas will go and forked it in.
The afternoon was cross stitching.....finished a Christmas card for a small person.

Friday and we were away early to Addenbrookes hospital. Once again Col was put in a little side room to wait and when I eventually tracked him down (I'd dropped him off and gone and parked) I found him laying on an examination couch  - half asleep. Three hours later we saw doctors and the nutritionist. She found him lots of high calorie juice drinks and milk shake mixes to make up for the calories he's not eating. News from doctor isn't good but we've decided to go ahead with the Photopheresis treatment which may help the Graft verses Host disease that's causing the mouth ulcers. So two consecutive days at Addenbrookes soon. Slow traffic and a lot of rain all the way home and it looks as if we are in for several wet days.

Have a good weekend everyone
Back Monday
Sue