On Monday evening I was off to Big WI, a week late due to Easter.

The speaker was  Tina Oldfield whose daughter had died from breast cancer back in 2004, leaving two small daughters. Tina, her husband, sister and brother in law decided that they would set up a fund to raise money for a breast cancer charity and do something that would really challenge them.......a trek to the base camp of Mount Everest in Nepal.

They gave themselves 18  months to get fit and prepare and set off over Easter 2006 as the decade long civil war was reaching it's violent climax.............. they were already on route as the government warned people not to travel there.

Her photos of the trek up the mountains towards Everest were amazing. There are no roads so everything is taken to the villages in the foothills by Yak or by manpower. The porters who help tourists and trekkers are paid the equivalent of just £1 a day........ Nepal is a very impoverished country. The lodges they stayed at during their 14 days were primitive. No electric and very  basic hole-in-the-ground toilets and few washing facilities.......... They were very glad they'd taken wet wipes. Only one of the lodges had anything resembling a shower!

They were two days away from their destination when they awoke to heavy snow, very unusual for April in Nepal. On limited time and unable to continue they very sadly had to give up. Back down at the airport they got stuck there for another day as terrorists threatened to blow up the control tower!

Luckily all their sponsors paid the money and they raised over £3,000. On the way back down they decided they had to do it again the following year to complete their mission, so in 2007 they returned and in perfect weather with no civil war they completed their trek to Everest base camp.

Since then by giving talks and selling pens in memory of her daughter she has raised over £18,000.

Although most WI's no longer sing Jerusalem, there is one tradition that has survived the years......Birthday Posies.....when people with a birthday during the month are presented with a small posy of flowers.

This is mine for my April birthday. 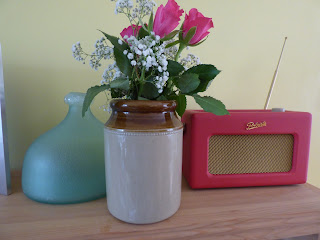 Many thanks for comments yesterday, unless something Really Interesting happens in the next few days I shall have run out of ideas for posts by the end of the week, which is a slight problem...... Anyone got any bright ideas?