I found the memory stick so I could load on some photos of Jacob and Florence ready to take to print out......hope Asda in Ipswich still have the photo printing machine. There were lots of photos from last year on the stick so then I had to find the photo album to see which ones I'd already printed and it was while I was doing that when I came across this photo from Spring 2002. 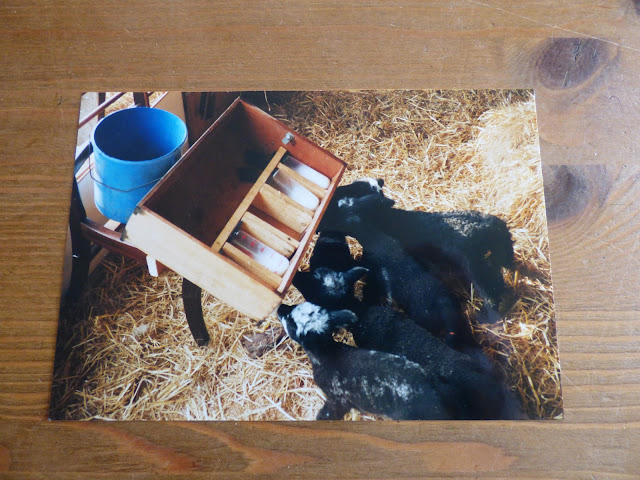 Kev at An English Homestead did a post about his ewe who had 4 lambs - quite unusual, and I commented that we'd had one who had 4 once, but she'd broke her leg/ pelvis having them so we had to have her destroyed and we'd bottle fed the lambs with Col's home made bottle feeding device. There are actually 5 lambs in this picture as we were given a tiny orphan lamb as well but she was fed separately by hand. For any sheep connoisseurs out there these were Ryeland.....the 'teddy bear' sheep with a bit of Shetland in their mum, she was a brown Ryeland cross and the lambs were black when they were born gradually getting browner as they got older.
Lambing each Spring was never fun......getting up to check them through the night, and it was always blinkin' cold but once they'd arrived a lot of time was wasted watching them! ( don't read this next bit if you are vegetarian or vegan!) and we made a good income from selling the fattened lambs in half-lamb freezer packs

I also found this from Autumn - 2002, our first ever pumpkin harvest at the smallholding. Later in 2012/13/14 we grew even more to sell and had about 3 times this amount every year. 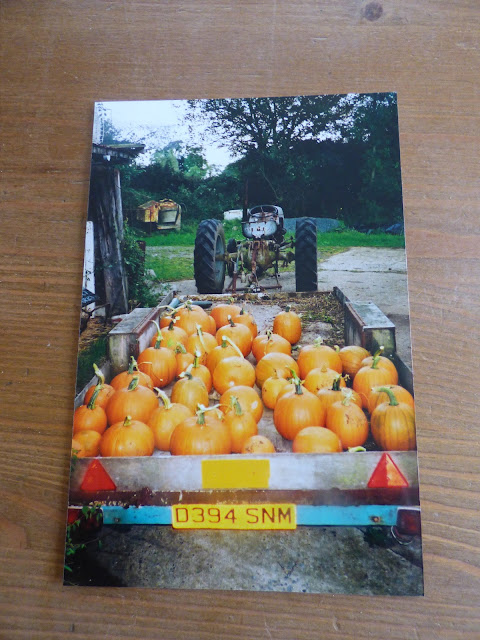 Happy memories but I'm glad we're not still planting and harvesting on this scale.........it was hard on the back!


The New News is a cancer update and Great Joy (not) .........we now have to go to Addenbrookes 3 times a fortnight instead of just once a week! This is because they are trying a different sort of treatment called Extra Corporeal Photopheresis which in English means exposing the white blood cells to UV light outside the body. This is to treat the Graft versus Host Disease so they can get him off the anti-rejection drugs,so the donor stem cells can take over completely. The cancer has definitely moved to the Lymph glands and he is taking some chemo tablets that he had in 2016 ( they didn't work against the bone marrow lymphoma but should work to treat the enlarged Lymph glands). It's very important to battle on quickly. This new treatment (ECP for short) takes between 1½ and 3 hours on two days a fortnight and goes on for 3 months  before they review it, so lot's more traveling back and forth through most of the summer.

We are resigned, as the definition for that word says, " resigned to an unpleasant  situation or fact, we accept it without complaining because we realize that we cannot change it!"

Sums it up nicely.

I'm debating if I can pluck up courage to sometimes take myself by bus into Cambridge city centre  while Col is having the treatment. There are all sorts of wonderful places to visit but I'm terribly prone to getting completely lost in town centres! No sense of direction at all.

Thank you for comments over the weekend. I sometimes feel we were forced into retirement early but there is no way I could commit to part time work or even volunteering at the moment. So we will soldier on as we are.

Back Tomorrow
Sue
Posted by Sue in Suffolk at 06:00
Email ThisBlogThis!Share to TwitterShare to FacebookShare to Pinterest
Labels: Memories, Non Hodgkins Lymphoma