All the best cooks use gas! and that was my reason for having an LPG cooker installed as soon as I could after moving here. Towns and  a few villages in Suffolk have natural piped gas but I'm much too out in the sticks.
I've used a gas cooker for all except just a few years since moving into my first home in 1975, mostly LPG  and it makes no difference to the cooking whether its mains or cylinders. Of course I have to organise delivery or fetch the cylinders myself, which I don't mind because they are available in lots of places.

They are only small cylinders so I just wiggle the empty one onto the sack barrow and then shove it in the car. I always keep a spare and that's easy to move using the sack barrow again from the workshop around the house to where they stand. My spanner that fits the cylinder connection is in the garage and has a bit of tape on it so  I always know which one it is and all that needs doing is shutting off the gas and connecting up the new cylinder and then turning the gas back on. 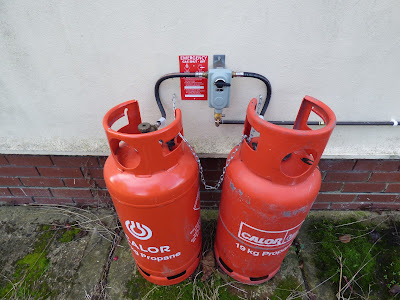 Then next time I'm out in the car it's easy to call in to the hardware place or a garage and pick up a refill. They cost about £36 now. Using gas like this is much easier than it once was because years ago there was no automatic switch over device which meant that the gas would run out in the middle of cooking and often I wouldn't notice,  resulting in flat sponge cakes or very late meals. Now the switch over device starts using gas from the new cylinder as soon as one is empty. Its also easy to see when a cylinder gets close to empty as the little window under the pointer gradually turns red with a dial moving round in it. 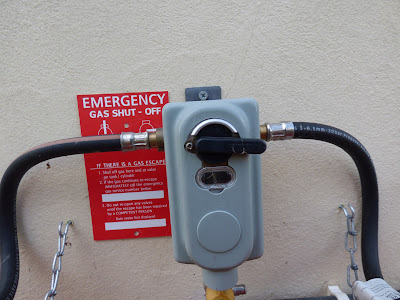 Nowadays even these little 19kg cylinders have to be chained to the wall and the emergency shut off sign is obligatory too. The black pointer above the window is turned to whichever cylinder is being used. So you can see that the right hand one is the one being used and it's nowhere near empty as there's no sign of the red dial appearing in the window.

And this is where the gas ends up 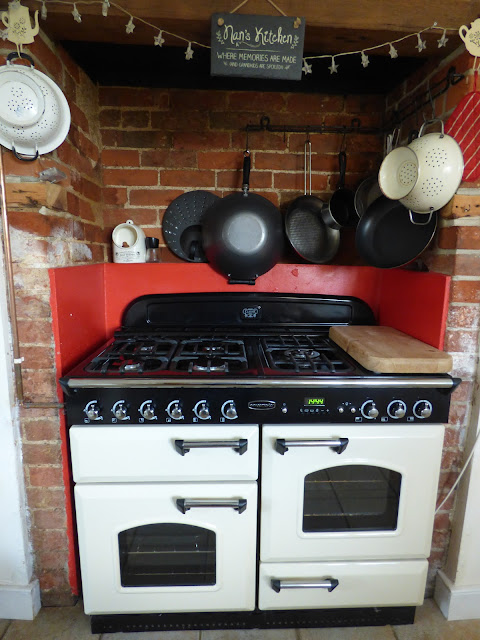 Leaving this cooker behind when it's gets round to moving house time will be a wrench, maybe I'll take it with me but it's not an easy thing to shift, not heavy but big.


Back Tomorrow
Sue
Posted by Sue in Suffolk at 06:00
Email ThisBlogThis!Share to TwitterShare to FacebookShare to Pinterest
Labels: In the Kitchen