Before the church photos I must say thank you to everyone for comments yesterday and hello and welcome to more followers.

It's all about the stained glass in this small church close to the Norfolk border. 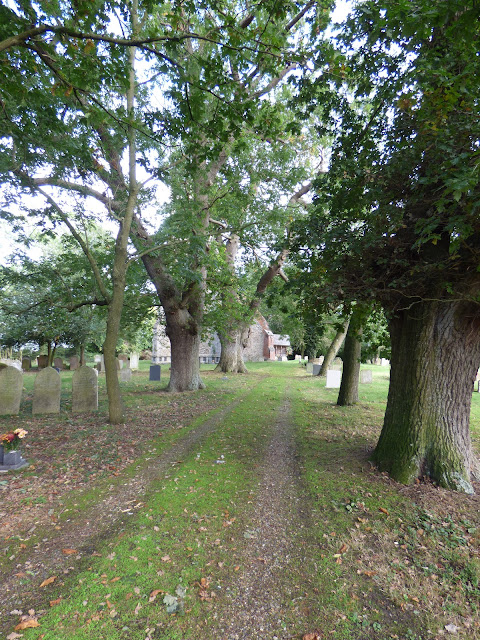 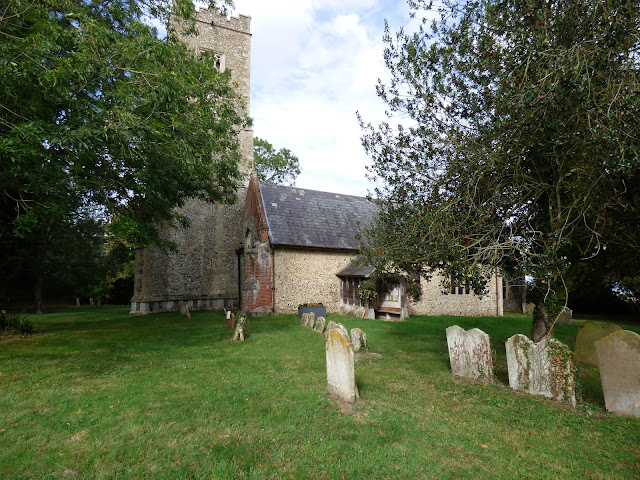 The porch is also special as it's timber framed which is quite unusual.  The outer frame dates right back to the C14. The baskets of fuchsias were huge and colourful . 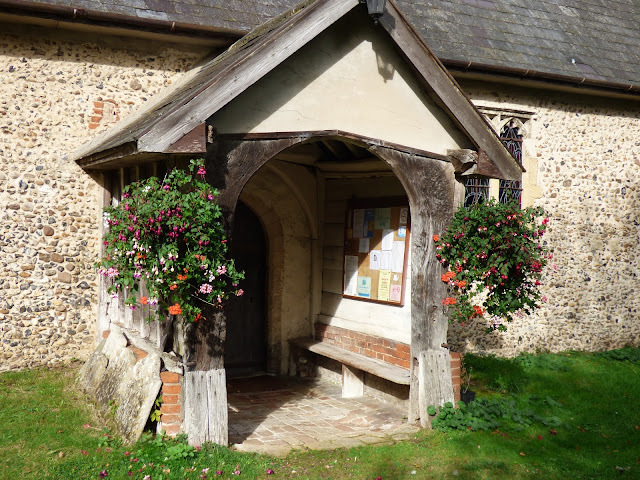 The C20 stained glass is the work of the artist Rosemary Rutherford who was the sister of the vicar at nearby Walsham Le Willows,  a church I visited in April . Its certainly striking and so different to old stained glass. They are her designs but weren't made and installed until many years after her death, probably when parishes were combined so that her brother John became vicar of this parish as well as Walsham . 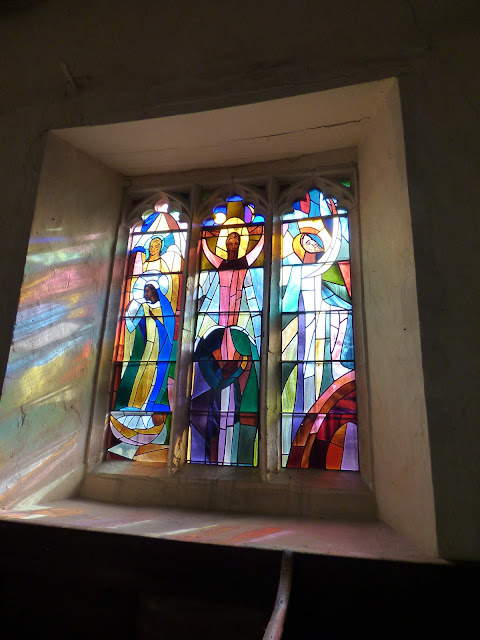 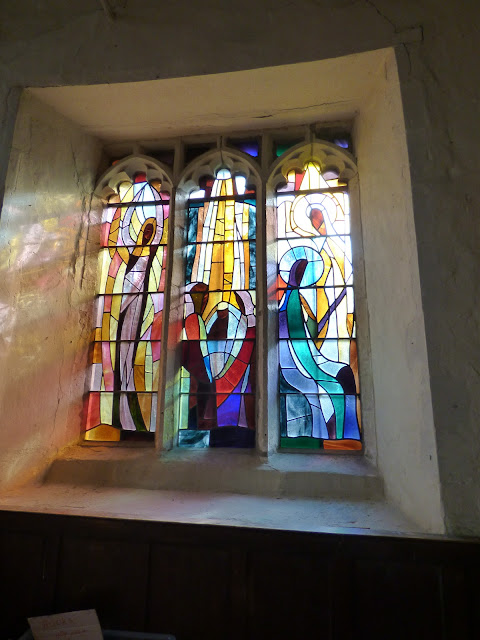 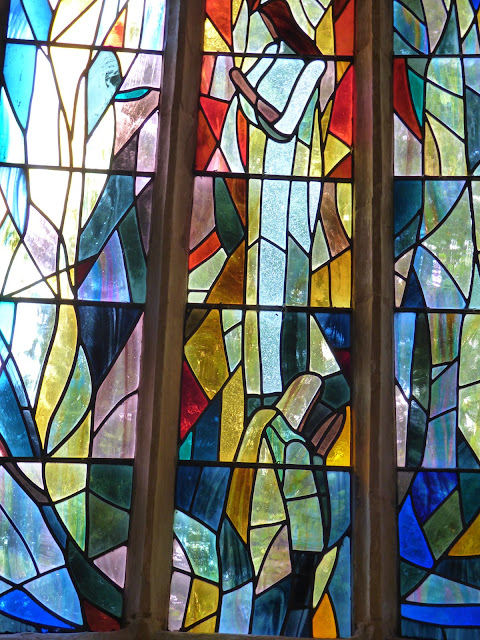 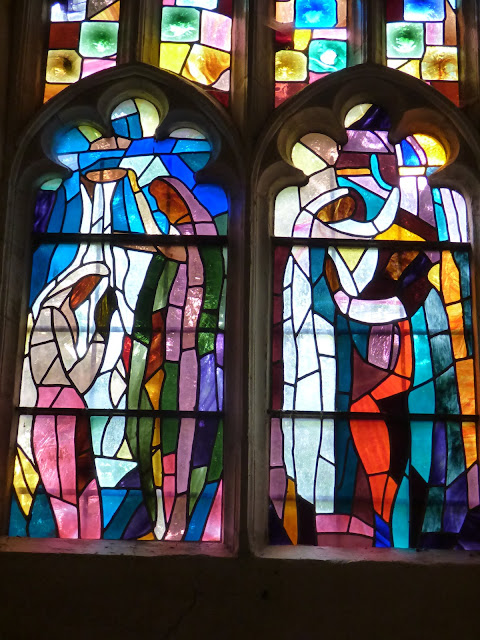 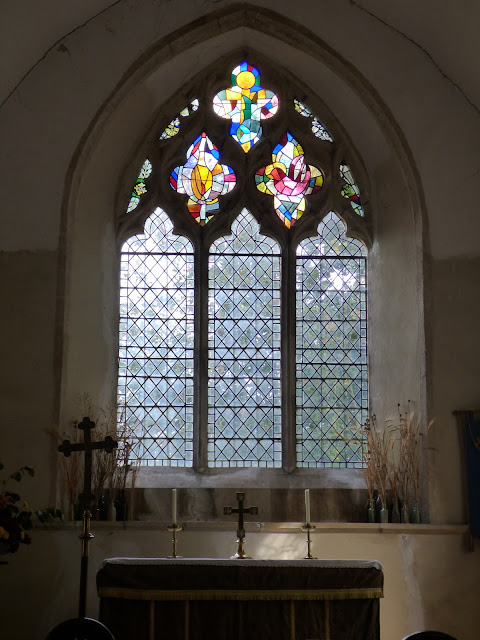 Here is her history

1912 - 1972
Rosemary Ellen Rutherford, was born at The Parsonage, Bartley Green Lane, Northfield, Kings Norton, Worcester on 1 September 1912, daughter of Revd John Finlay Rutherford . Rosemary studied at the Slade School of Fine Art and in 1939 an artist and part-time teacher at St Cedds School, Chelmsford, living at The Vicarage, Broomfield, Chelmsford with her parents. On the outbreak of the Second World War, Rosemary joined the Red Cross as a volunteer when she performed a variety of jobs, including driving a mobile canteen round gun batteries on the east coast and working as a nurse in hospitals and convalescent homes for servicemen. She was given permission by the War Artists Advisory Committee (W.A.A.C) to record her work. She studied art and painting with Cedric Morris [q.v.] at Benton End, Hadleigh, Suffolk but is principally known as a stained glass artist. Her work is in the Suffolk churches at Boxford, Walsham le Willows and in Hinderclay, where her brother, John Allarton Edge Rutherford (1910-2005), was the incumbent, she also completed stained glass windows in several Essex churches and as distant as West Heslerton All Saints, Yorkshire in 1964. She was of The Priory, Walsham le Willows, when she died  suddenly at Lambeth, London on 20 June 1972 aged just 60.

Many of the pew ends have these carved rosettes, some have Fleur-de-lys and some have initials thought to be the churchwardens at the time. 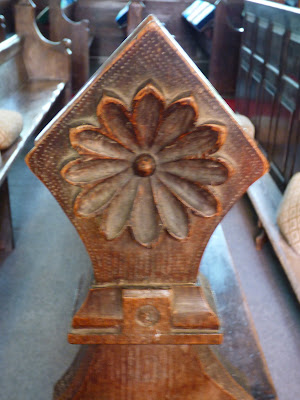 So many of the churches I've visited have beautiful stitched kneelers, but usually they have one main colour. Here at Hinderclay they were multi-coloured which looked really colourful and beautifully stitched. 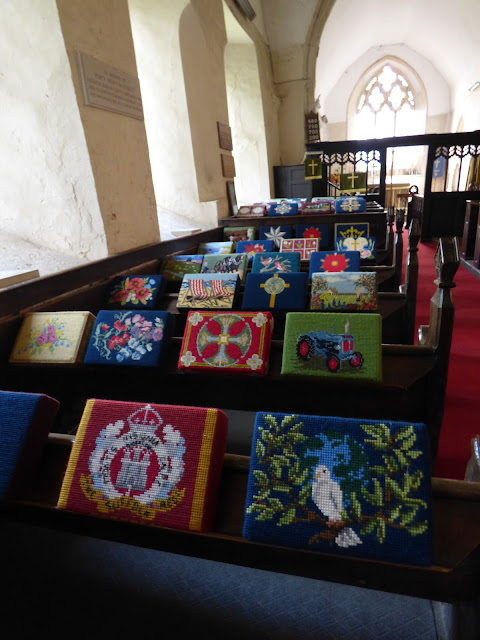 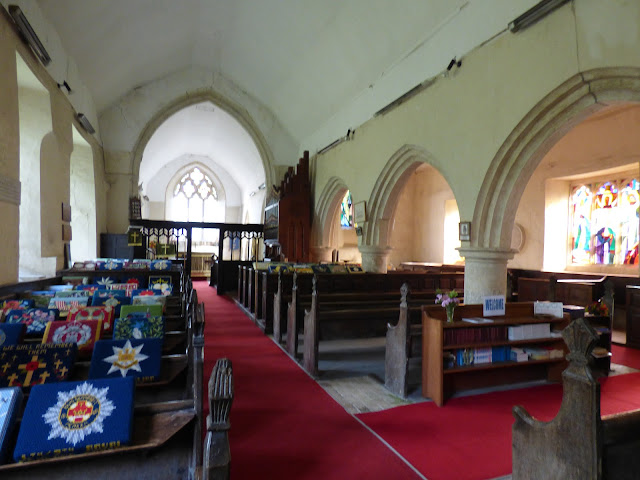 I noticed the decorated  organ pipes 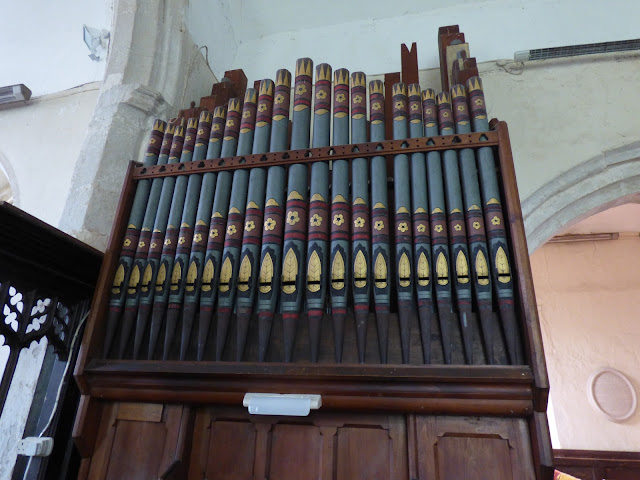 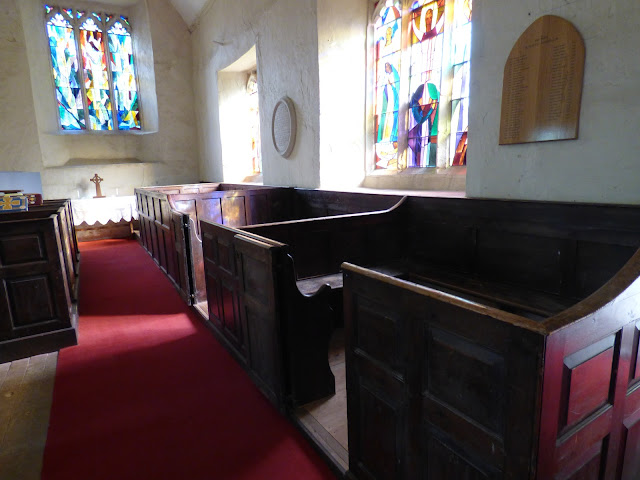 If or when I get to the churches on the Suffolk/Essex border I will see her other designs at Boxford church as that also features in the 100 treasures book.