In Praise of Reprints

When I first started blogging I had quite a lot of bookish blogs on my reading list. Some featured the type of serious books that I was never likely to read but one blog I've been pleased to follow ever since is Furrowed Middlebrow.

Scott's interest in British women's fiction from 1910- 1960 coincided with so many books I'd read or shelved when I worked in libraries in the 1970's, many were so familiar but he often reviewed books impossible to find so it was very exciting when he linked up with Dean St Press to re-print books from that period, books long forgotten and long out of print.

I added several to wish lists and have been lucky to receive a few, buy one or two and borrow a couple more from the library. There are 38 FM books now with 8 more due in  January.

Company in the Evening by Ursula Orange was one I was given, read  and enjoyed back in 2017 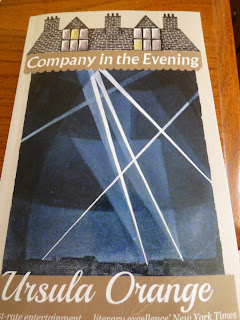 Vicky is a young happily divorced single mother with a good job but when war breaks out and her brother is killed she agrees to have her pregnant sister-in-law come to live with her. Rene had been living with Vicky's mother who thinks it would be good for Vicky to have "company in the evening".
The book is written in the first person and Vicky thinks "Of all the unhappiness my divorce has brought upon me, loneliness has never been in the least a part. Lack of company in the evening is to me an absolute luxury".
Unfortunately Rene and Blakey (the elderly housekeeper) don't see eye to eye on anything and once the baby arrives there is a lot of friction in the house. Add in an unexpected meeting with her ex-husband, a difficult client at work and an illness for her little daughter and this makes a brilliant story.

At the end of the post I wrote about this book I said I would add Tom Tiddlers Ground by the same author to my wish list , but it wasn't ever bought so I was Very Excited when I spotted the book in a box at a car boot sale a few weeks ago.

I've now read it and enjoyed just as much as I did Company.... The gorgeous cover - from a painting by Eric Ravilious is a treat even before opening the book to read. 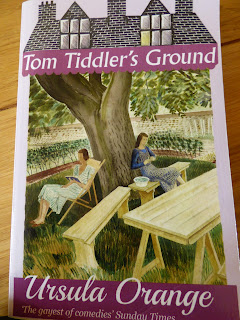 Tom Tiddlers Ground is about two women, friends at school but Very different and is set in the first year of WWII.
Caroline Cameron - charming and superficial, evacuates herself and two year old daughter from London in the early days of the war to stay with an old school friend Constance Smith - completely opposite of Caroline in every way.
Caroline has been happily married to John for 8 years but recently has begun contemplating an affair with a handsome actor. Constance is married to Alfred, not happily  but she would be the last to admit it.
Other people in  the story are another evacuee and her sickly child, also billeted with Constance (who luckily owns a large house once belonging to her parents) Constance's elder brother George. A young  girl....Lavinia who Alfred is teaching to drive she imagines herself in love with Alfred. Lavinias Father  - Sir Robert, once Alfred's employer and Alfred's half sister Mary.

This is a witty look at troubles and changes with evacuees and disastrous marriages and how people forced together can bring out the best in each other.


Dean Street Press are not the only company reprinting books that I enjoy. I've often mentioned Persephone Books. Publishing just 5 books each year, mainly by women writers and usually on the more serious side although they have overlapped with Dean St Press by publishing some D.E Stevenson.
Little Toller Books that I mentioned HERE who re-publish non-fiction country books. A company called Agora Books who publish all sorts but have brought back all the crime books by George Bellairs written in the 40's, 50's and 60's and of course The British Library Crime Classics who've rescued loads of books from obscurity.

It seems there is no chance of my ever running out of interesting books to read........old or new.

Posted by Sue in Suffolk at 06:00
Email ThisBlogThis!Share to TwitterShare to FacebookShare to Pinterest
Labels: Book Reviews, Eric Ravilious