How Does a Week go so Fast?

It's amazing how the days fly by as you get older, someone explained this odd phenomenon to me once ..........something to do with percentages of days lived I think..............all I know is that we seem to be speeding to the end of October before I'm ready for November.

Anyway a week has gone so it's another Saturday review. The weather this last week was a bit better than for quite a while, although Monday and Thursday were damp and grey here in Suffolk.

I had a rude awakening on Monday night sometime between 1 and 2 a.m when I heard a vehicle on the driveway beside the house and under my bedroom window, and as you know I'm up the end of an unmade lane so there shouldn't be anyone driving up the lane unless they are coming to my house and definitely not at that time of the night. I leapt (staggered) out of bed and peered out the window and there was a very large van trying to turn round. I watched it inching round back and forwards getting rather close to the conservatory and I could see the registration number, (which I then forgot after going straight back to sleep) and the fact that it was a van hired from Sixt. It eventually turned round and went off down the lane back to the road without stopping anywhere.Very Strange. Think I'll ask my next door but one neighbour to get the other gates done ASAP. At least I know that the stones of the driveway crunch enough to wake me up. Once the gates are done anyone driving up the lane has to reverse all the way back again or try and turn round in next door's gate way. That should put people off coming back!

I got out on the bike on Tuesday - just a couple of miles but every little helps.

I got out on the bike on Wednesday too, biked down to the village church for their regular Wednesday coffee morning, I've been meaning to go ever since we moved here. The lady who used to live in my house still runs it and makes lovely cakes. Got all the way there and found roadworks outside with the water company digging things up and a notice on the fence "Sorry coffee morning cancelled due to roadworks and water being turned off"  Ho Hum! Biked home again (after walking up the steep hill).

Before biking to the village I'd already driven to the Wednesday boot-sale (and back obviously!) - it was blinkin' chilly, the coldest morning of the autumn so far.
Didn't buy much just some apples for £1, eggs the same,  new gloves also £1 and a huge chunky wooden block chopping board/pan stand for £2. I've sanded it down and scrubbed it with salt. Looks really good. 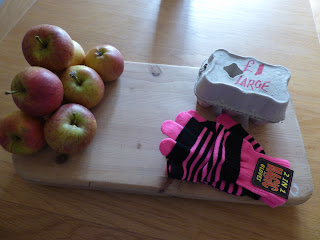 No swimming this week due to it being half term, and I've not been visiting family either but I have got lots of odd jobs done at home instead, letters written, birthday cards sorted. Tidying the toys in the conservatory and a wee bit of cleaning. I went shopping and printed out some photos from last weekend to share round the family, and in Adsa I discovered the lightweight muslin/nylon bags for sale, right beside the loose vegetables - clever marketing! at 3 for £1 they seem good value. They'll fold small enough to keep in my bag so I too can avoid buying plastic wrapping when loose veg or fruit are available.

Picked up this little book of poems in a charity shop, divided into the seasons, I'm planning to use a few on the blog. 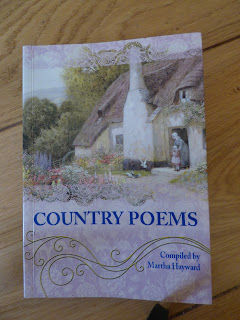 Friday should have meant going to Diss to meet up with Norfolk Blogger Rachel but her septic tank problems have put off our meet up for a little while - Septic Tank Problems are one of the Joys of country living! and need sorting sooner rather than later.
Instead I made marmalade for the hampers and me. This time using a tin of the cheats ready prepared oranges with a tin of chopped pineapple, from an idea in the WI book of preserving. I've done orange and grapefruit, orange and whiskey and lemon and grapefruit but pineapple is a new one on me - I thought pineapple stops things setting but it seemed to be OK, and nice to try a different flavour. I know that some people would throw up their hands in horror at the thought of using the ready prepared tin but it's a darn sight easier than chopping all those Seville oranges........ I'd rather be doing something else.
Before it rained and got really windy I also cleaned the greenhouse glass, both inside and out, couldn't reach the top very well but the long handled car wash brush has loosened all the green muck outside, hopefully the rain then cleaned it even more.There is just one tomato plant left inside with a few small green tomatoes hanging on.

One problem with this weekend, and that's the clocks going back. I wrote about why we change the clocks  HERE  so won't repeat myself, still don't like it even after knowing why.  Thankfully there should be something  interesting book-wise, another giant second hand book sale.................. I'll write about it next week.

Hope your weekend is interesting too
Back Monday
Sue
PS Thank you for some comments I'd not noticed on some old posts from several days ago.


Posted by Sue in Suffolk at 06:00
Email ThisBlogThis!Share to TwitterShare to FacebookShare to Pinterest
Labels: Being Grateful