I needed to fill a blog post so I'm unashamedly copying something Sue-in-Wales/England did the other week.

This is me aged about one I think - born with black hair. Big fireguard around the open fire and a very 1950's sofa in the living room of the house in Haughley, Suffolk that was my home for 20 years. 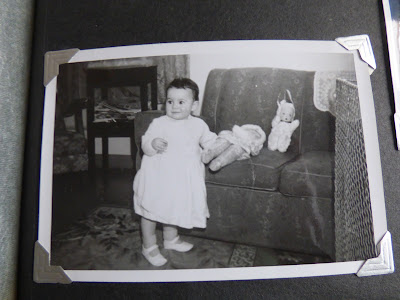 1961 aged 6  - back left -  with my little sister and our cousins. We're on holiday in Norfolk. People didn't go far for holidays then 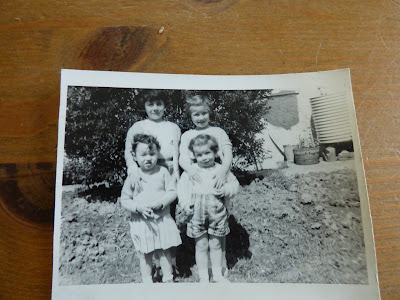 1962, 7 years old and being a bridesmaid. Red velvet dress with gold sash. I wonder how they fixed that head dress on my hair which was always too straight and short for hairclips? 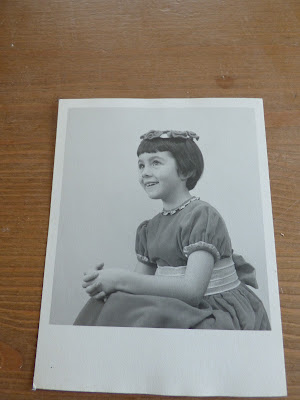 Then there's a gap, I don't seem to have many photos of myself for lots of years. I know I was given a little camera when I was about 9 and have lots of tiny photos that I took of other people.

So  1969 aged 14 in summer school uniform for Stowmarket Grammar School. The dress was sort of pink/red and white stripes, I seem to have a heck of a lot of hair! Still black. I'm standing beside our house, same house as the first picture, we didn't have much of a  proper garden  as Dad was a builder so round the back of the house was a builders yard with shed, heaps of sand and bricks and everything else a general builder would need for building houses. 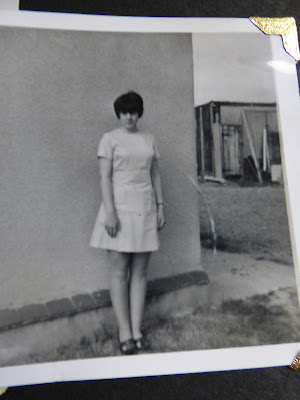 And a couple of years later in the new 6th form uniform, navy skirt, cream shirt that I never wore at school. I was ready to go back but had applied for a job as a library assistant in Bury St Edmunds Library during the summer holidays and the O Level results were late out. I needed English and Maths and 3 other O levels for the job. I got the grades, got the job and never regretted it. 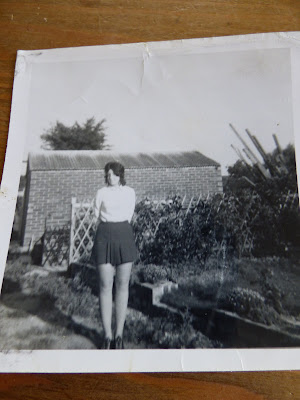 Not many people have seen this photo since 1975........ aged 20 and getting married to first husband. We'd met  both aged 16, engaged at 18 and married at 20 - that's what you did back then if you wanted to get away from the family home and hadn't been to university. We split and divorced in 1978. I chucked all the other wedding photos. I don't regret getting married  then because if I'd not been with P I would never have met Colin. P and I had different ideas about life while me and Col were on the same wavelength. Plus it got me on the housing ladder 3 years earlier than it would have done - which was a huge help when house prices shot up at the same time! ( After me P married and divorced twice more and has no contact with his two sons and grandchildren- Sad.) 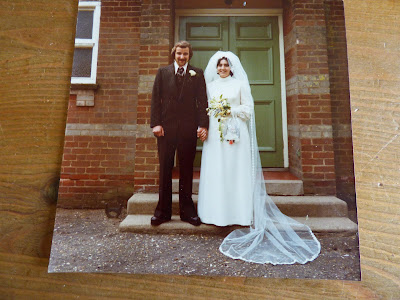 And here I am with Col, the beginning of 38 wonderful years of 3 children, 6 houses and a smallholding!
Why the heck he chose such a light coloured suit - it was sort of pale beige - I have no idea. I didn't know until he picked me up on the morning of the wedding. He never wore it again and I never stopped reminding him about it! 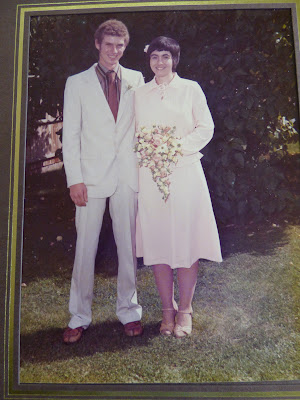 And the only recent photo that I actually don't mind people seeing. At Son and DiL's wedding in 2016. The hair's a lot greyer and I'm a lot fatter! 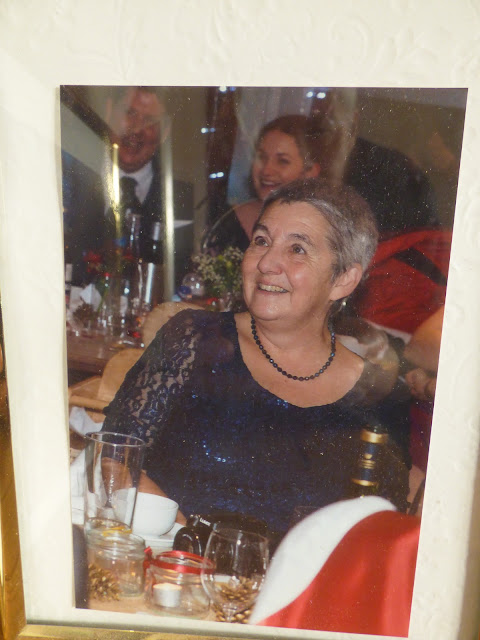 Back Tomorrow
Sue
Posted by Sue in Suffolk at 06:00
Email ThisBlogThis!Share to TwitterShare to FacebookShare to Pinterest
Labels: Our Story