In that very short recorded bit I posted the other week about staying here someone said they could hear my Suffolk accent. There used to be lots of people with broad Suffolk accents and using the dialect but now it's disappearing .
I've been clearing out more books and found this little book among some other Suffolk books. 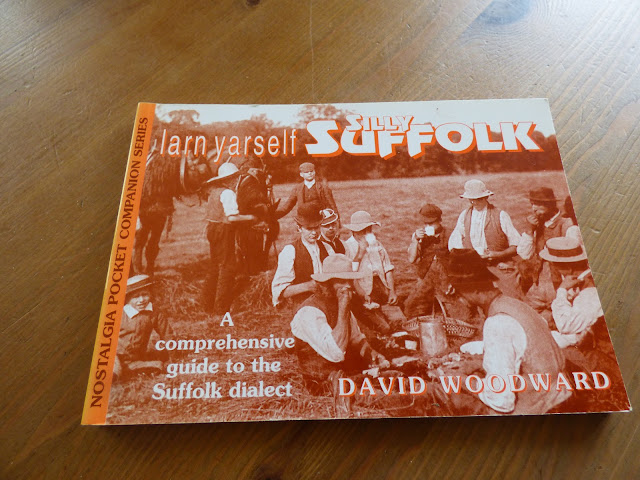 Thought I'd test you out with some Suffolk words and dialect from the book that I've actually heard used. I'm not sure these are only used in Suffolk, they could be common country words.
Work these out..............


Airy Wiggle is an Ear-wig
Backus is the scullery built on at the back of a house
Bag-up is a cow,sheep or goat just before calving or kidding - when the udder is filling up with milk
Biggety - bit of a show off. A Biggety-B****r was someone who thought he was better than others!
Bor - Used as a greeting between male friends " How you gettin' on bor?"
Carr - small wood or copse near water
Chaites - left over food
Crome is a garden tool with prongs at right angles to the handle
Ewe - owed " I ewe him a fiver"
Fourses - like elevenses but around 4o'clock in the afternoon, needed during harvest and haymaking when long hours were worked out in the fields
Goose-gog is a gooseberry
On the drag is running late for something
Phoebe is the sun
A push is a boil
Rile means annoying.
A slivva is a splinter of wood in your finger
A Tilt is a tarpaulin
Ul is Suffolk for  'you will' or I will
Watering  is where a steam is shallow enough for a road to go through it.

Are they Suffolk words or used everywhere? I have no idea!

If you watched Antiques Road Trip on Tuesday afternoon you would have seen the two antique experts motoring around the bit of Suffolk where we lived  for so many years. Phillip Serrell was at the Long Shop Museum in Leiston and the man there was demonstrating the use of a stirrup pump and said you put it in a pail. Mr Serrell said " hang on, that's what we call a bucket isn't it?" We always had a spade and pail for the beach when I was little, never a bucket. So is pail a Suffolk word too?


Posted by Sue in Suffolk at 06:00
Email ThisBlogThis!Share to TwitterShare to FacebookShare to Pinterest
Labels: Suffolk Dialect