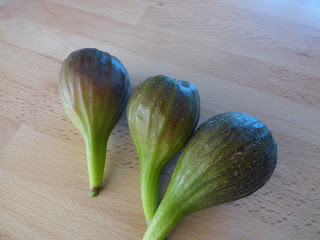 The fig tree is only a few years old, brought here in a pot after I bought it from Wilkinsons for £3.50 in January 2017, just before we moved here.
Col took up a paving slab from the patio to make a sheltered spot for it and I watered it all through the dry summers we've had since.

We had a fig tree at the smallholding, started in a pot and them planted out at the back of a chicken shed so the water would run off over it. It took many years to fruit as it wasn't really in a sunny enough place.
I remember my Dad saying "are you going to eat them?" and me saying "yes of course, I love them fresh". He said the only other person he knew who'd liked them was his Mother -  the Gran I never knew because she died when I was only a few months old - I wish I'd known her as she loved gardening and farm life.

What about finding out more about this ancient fruit to fill a blog post?

Figs originate from Mediterranean countries where they grew wild and were eaten fresh and dried as  part of a staple diet. It's thought the  Romans brought the first fruit here but the trees came quite a while later, perhaps in the early 16th century. They were first grown here as an architectural plant, growing up to 26 feet tall. The fruit rarely ripened and even now after breeding new varieties we only get one crop a year whereas in sunnier and warmer countries they have two crops in a year.
Ben Johnson (1572- 1637) wrote

The early cherry with the later plum, fig, grape and quince each in his time doth come.

and of course figs get lots of mentions in the bible. The Victorians used tin fig leaves to cover nude male statues in museums and country houses.

As children we were given Syrup of Figs quite often even if we didn't know if we'd "been" or not! I didn't mind it................ but dried figs are quite nasty in my opinion - gritty - one of those things bought every Christmas that nobody ate.

Back Tomorrow
Sue
Posted by Sue in Suffolk at 07:00
Email ThisBlogThis!Share to TwitterShare to FacebookShare to Pinterest
Labels: Figs