A Few Good Finds at the Boot-Sale

Lots of people selling at the local boot-sale on Sunday and crowds buying too, but plenty of room to look round without feeling hassled by too many people. They've spread the sellers out and stretched the car park to a bit further away so although it's further to walk from the car park it never feels crowded around the tables of stuff - and plenty of STUFF too - junk, tat and unwanted rubbish!

Although if I had a bottomless purse I could have bought toys for grandchildren to last them for the next 10 years and enough children's books to stock several libraries!

Instead I came away with just 4 things 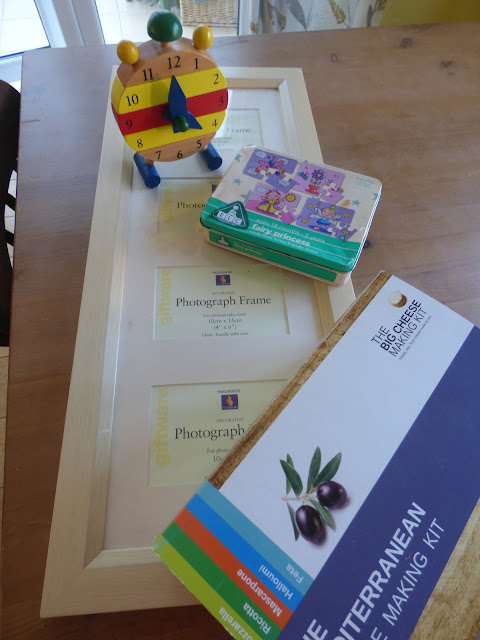 A large photo frame with four spaces now I have four grandchildren was £1. The tin of 4 puzzles and the clock fit-together thing were to take to Youngest Granddaughter  as I was going there for lunch but my favourite find was the Mediterranean Cheese Making Kit. "It's not been opened and its out of date" The lady said when I asked how much and I was expecting her to say it was several £'s but when she said £3 my purse opened quite quickly! . After putting my glasses on I found the Best Before date was 1st August 2020 - so only 1 day over!
I used to make a soft goats cheese quite often when we had plenty of milk and also a paneer type cheese too and thought it would be fun to see what this kit does. (Just looked on Amazon - this kit retails for £27.50 !!!)

I still haven't got round to writing a list of things to look for but remembered to search for a  tin-opener - although it  might be better to buy a brand new one anyway, to be sure it's OK. I do have a tin opener but it's sometimes temperamental so put one on my mental "look for" list. Perhaps next week - weather permitting.

Posted by Sue in Suffolk at 07:00
Email ThisBlogThis!Share to TwitterShare to FacebookShare to Pinterest
Labels: Car Boot Bargains, Cheese making