Suffolk was in the  HOT  part of the country all week until yesterday.  6 days over 30℃ is quite unusual for England and 6 nights of +20℃ is also unusual and not good for sleeping. Even the cat wandered about looking for somewhere cool. I was just glad I hadn't got to go to work!
My "triple aspect" living room means the sun shines in all day - which I love for the light but it does get rather warm.I don't like electric fans - my electric bill doesn't need to be bigger - so I just open the windows wide, draw the curtains over and keep as cool as possible and then lazed about watching the World Championship snooker - delayed from May and so much better without an audience coughing and fidgeting!

I delivered my two pathetic Blueberry bushes to Sis-in- law and Brother-in-law with half a bag of Ericaceous compost in the hope they are better at looking after them than I am! SiL got one for BiL for his birthday last May so now they have 3 which should help with pollination. While there I picked up another bundle of the puzzle pages from the local  daily  paper. I've been trying to do the huge Sudoku which is 25 x 25 and uses numbers 1 - 9 as well as letters L - Z. There must be a trick to doing it somehow - but I've not found it yet.

Tried to start the ride-on mower during the week just to trim some of the grass round the back of the house, turned the key and got a horrible rattling noise - oh heck. It's gone away for repair again, second time this year something's gone wrong, this time probably the solenoid in the starter motor, just hope it's not too expensive. I want to use the mower and it's trailer to move the 20 slabs that are round what was the new raspberry bed, although it would have been to hot for that job this week anyway.

On Tuesday I used my boot-sale bargain cheese making kit to make my first batch - more about that next week as it deserves a post all to itself.

Visited Youngest Daughter and Oldest Granddaughter and took the PPE that I collected in Stowmarket last week for the opticians where she works.
Then had a visit from DiL with Youngest Granddaughter and Youngest Grandson. The little fella is 6 months old and so much happier now. He can sit up with a little support, is enjoying his first tastes of squishy solids and loving water in a sippy cup which is very handy with this hot weather. I fetched down the photo album with Son at the same age - completely the same- little round face and blond hair and same smile too.

Here's Son with his big sister and Colin in 1982 when Eldest Daughter was nearly 2 and Son about 6 months. None of the children or grandchildren have inherited Col's mad thick curly hair! 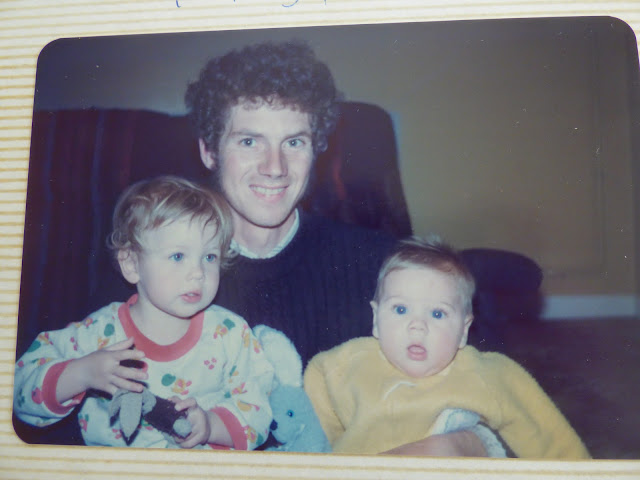 Youngest Grandson below has the same look of astonishment when having his photo taken although less hair than his daddy had at the same age! 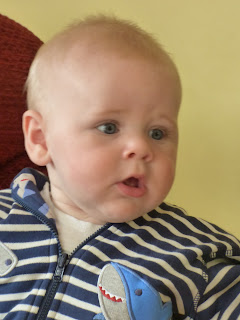 Listening to odd bits of radio and TV news this week I feel so sorry for all people whinging about having to decide between going abroad for a holiday and maybe having to isolate themselves when they come back - what a shame! Pity they don't remember the part of the population who can't afford a holiday anywhere because they've lost their jobs and another bit of the population surviving on the minimum wage and having no hope of a holiday.

This week I'm Grateful for

Hope everyone has a good weekend - the forecast for Sunday looks a bit iffy for a car-boot sale  visit, hope it's wrong. Despite the yellow weather warnings for thunderstorms there's still only been a couple of light showers here.


Back Monday
Sue
Posted by Sue in Suffolk at 07:00
Email ThisBlogThis!Share to TwitterShare to FacebookShare to Pinterest
Labels: Being Grateful