Looking Back at the Week

I spent Monday morning sorting more books to sell on Ziffit and at the end of the on-line stuff  it said they would be collected by courier instead of having to take them somewhere for collection - which was handy.

The electric was off for a planned outage on Tuesday morning so I pootled up to Diss and Morrisons and took advantage of the government half price food thing for my morning coffee break. Also went into Boots and printed out some up to date photos of the grandchildren to fill up the 4 space frame. Only Eldest Grandson's photo isn't recent - he'll have school photos soon as he starts in September. (Seems much too soon as he was only 4 in May - I don't like the way they do school intakes now). On Thursday as  the mower was back from it's latest repair I was able to hook up the trailer and shift the 20+ paving slabs that were round what was the new raspberry bed. Hot work - not sure a 65 year old woman is supposed to be shifting slabs. But the job's done all bar the soil leveling. 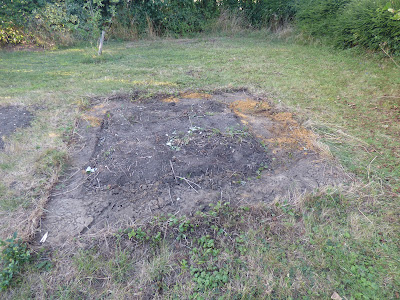 I'm advertising the fruit cage frame and netting in the local parish mag. next month - hopefully someone locally will want it.

Friday was so windy but a very warm wind - already the trees down the meadow have been losing leaves due to the lack of rain and after Friday even more are on the ground. Autumn really is just round the corner............ I don't mind, every season has it's moments.
I spent more time sorting bookshelves, tidying emptying, cleaning. One new bookcase (bought when we moved here as the shelves at the smallholding were all built-in) has been put in my bedroom as a bedside table so I can get rid if what was there. I managed to slide the old lot downstairs and will advertise it for free on the local facebook page. Youngest Daughter may have the other book case if we can find a way to get them to her.

All week I've also been doing other odd bits of gardening - between rain and the sweaty humidity. There's quite a lot to clear now -sometimes it feels overwhelming - but a bit at a time will get it done and I remember I feel like this at the end of every growing season since Colin died.

Now here we are round to Saturday again, I doubt anything exciting is happening this weekend but I'm ever hopeful!

Posted by Sue in Suffolk at 07:00
Email ThisBlogThis!Share to TwitterShare to FacebookShare to Pinterest
Labels: Being Grateful, Grandchildren, The Garden