My Week In Suffolk

It looks as if the "Legacy Blogger" will be switched off completely  towards the end of the month so I've swapped onto the new one and will have to put up with all it's foibles I guess. I tried it a few weeks ago and like everyone else found it annoying and went back, hoping it would continue as an alternative, but it seems not. Oh well.

Flowers on the table this week, blue and white - I know what both these are but the names have just gone out of my head for the moment! 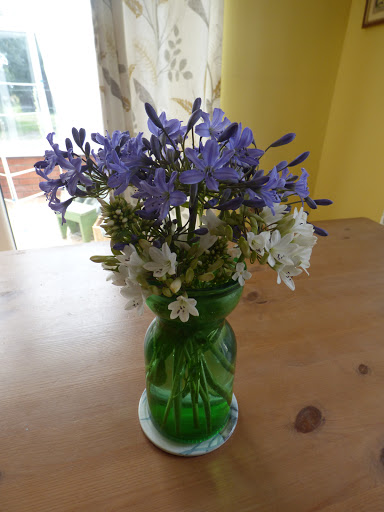 Shopping this week was at Asda in Stowmarket. While in Stow I ran an errand for the Opticians  by the coast where youngest works. She'd asked if I could pick up a box of PPE from a Stowmarket Opticians to take to her next week. I'm glad I had the address because when I lived and shopped in Stow in the 1980's this opticians was at one end of the town's shopping street and in the mean time it had moved right to the other end.
Coincidentally one of the few Facebook pages I look at  is a Stowmarket Then and Now page and this week they had photos through the years of one of the small shops in the town centre. I remember it as a sweet shop in the 1960's and an Estate Agent in the 1980s but between then and while we were away living near the coast it had been all sorts of different things- interesting to see. It's a British Heart Foundation Charity shop now.

During the week I roasted a tray of my beetroot and onions and shop-bought carrots  to box up and freeze like last year. This year I didn't put in aubergines or peppers because my peppers aren't ready yet and reheated roasted aubergines were horribly squidgy. The boxes were so handy last winter just to pull out and microwave. I need some more boxes before doing another batch because there are already a heap of tubs of aubergine and tomato sauce in the freezer. Winter supplies are looking good so far.

This is what happens when you leave 16 Tulip bulbs in heavy clay soil for 3 years and the reason why my tulips in the Cutting Garden this spring were spindly and small. The original bulbs had produced dozens of tiny bulblets but dry weather on  clay means they don't get much bigger than a thumbnail. 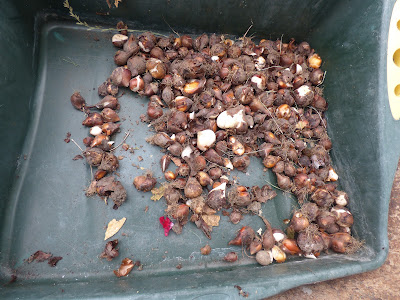 I always watch Gardeners World with envy when Monty digs his lovely soil with a hand trowel to plant things. Here its a battle with a crowbar! Well not quite, but you can see the size of the clods I turned up and this was AFTER I'd bashed the bigger clods a bit. 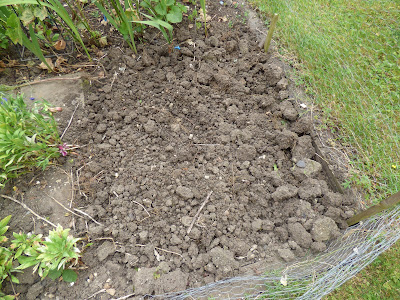 The Cut Flower Bed was made in a hurry, Colin wasn't really very well although he managed to run the rotovator over this patch after taking off the turf and using more of the wood from the pergola to do the edges and we put the wire netting up around the sides to keep the ducks and pheasants off just a few days before he died.
I came home from shopping via a garden centre and bought a bag of multi purpose compost and a bag of topsoil - to try and improve the soil here a little but what it needs first is some rain.
Then I'll replant the biggest bulbs and put the smaller ones in a planter filled with multi purpose in the hope that they will increase in size.

In the mood for sorting out the garden I've made a start on clearing the raspberry bed that we made in the first year and like the strawberry bed in a much too dry a spot. The canes just never multiplied and produced only a handful this year.Forgot to take a photo and there doesn't seem to be a single photo of the raspberry cage apart from the glimpse of it from the bedroom window. 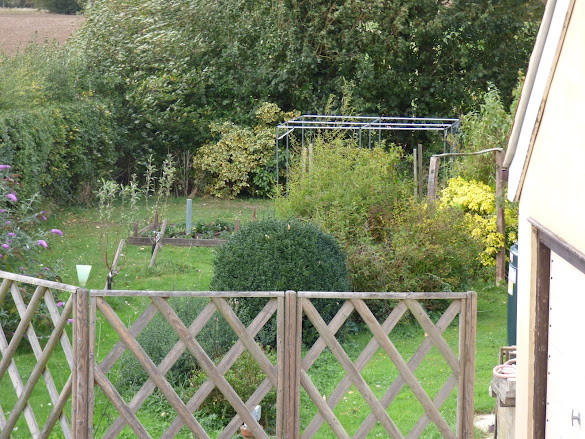 Eventually found the right size spanner to undo the bolts and now the aluminium frame is down and stacked ready to advertise for sale somewhere - I'll try the Parish Magazine first. Next job when it's cooler is to lever out the wood surround and move 20 paving slabs that we'd put down around the outside. Not this weekend - much too hot.

Hope you all have a good weekend. Car boot for me of course and plenty of reading while half watching the snooker on TV.

Posted by Sue in Suffolk at 07:00
Email ThisBlogThis!Share to TwitterShare to FacebookShare to Pinterest
Labels: Being Grateful, Cut Flower Bed, Flowers on the Table, In the Kitchen