Talking About Shops, Supplies and Preparedness

It was chance that meant I didn't panic when the shops ran out of loo roll in March. Luckily I'd just had my first delivery of 48 from the "Who Gives a Crap" company.

I'd also bought flour during February and can remember the checkout lady say "goodness you're going to do a lot of baking" and I said I was just restocking after Christmas and New Year. There actually wasn't a shortage of flour at the beginning of lock-down - only a lack of mills packing in small 1.5kg bags. The majority of flour sold in this country is either packed in 20kg sacks for bakeries or carried in bulk tankers for food manufacturing companies.

During the first week that the shelves emptied I opened a new pack of 6 yeast sachets and straight away wrote them on my shopping list - because that's what I do............ the supermarket yeast shelf was empty for weeks but luckily I found yeast before getting to the end of the pack.
So lack of stock on the shelves wasn't a cause for panic - and anyway there's always well stocked cupboards and freezer up the end of the lane..............miles from a shop.........you never know when it might be needed............... snow/car problems/dodgy knees or back.

In the fresh fruit gap after rhubarb and before the strawberries and raspberries  got going  I had a sort out of the tinned fruit on the top shelf and found I had one can of fruit cocktail dating back to BBE 5/2018 and 3 various others were BBE 2019. I remember buying extra cans of fruit when we were supposed to leave the EU first time round, as I imagined imports of fruit getting held up, but obviously didn't rotate my stock properly!
I ate my way through them - all were OK of course.
Now we've almost left the EU with discussions going on about trade tariffs and deal/no deal and once again it all happens at the time when there is a lack of English fruit available. So I'm going to re-stock with a few cans again.

The book I wrote about a while back talks about how the country prepared for rationing during wartime. People were urged not to hoard and of course many could not afford to buy anything extra to put away. 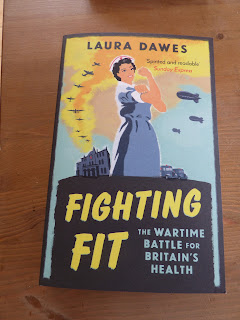 The Religious Community of Mormons are required to keep a supply of food stored away for themselves so they have enough to help other people where needed and that must have been useful for food shortages recently.

If you've ever watched any of the "Inside the Factory" programmes, (and there were also some made to show how food factories were affected during the early Covid problems) you will have seen how factories operate a 'Just in Time' ordering system, no storage at all.......straight from the truck into the production line.  Supermarkets only have small stockrooms now because with computerization they always know whats left on the shelves and items are ordered automatically. When shelves are empty it's rarely any good asking if there's some of what's missing 'out the back' anymore.

But going back to what I'd like  to store for any future lock-down or Brexit shortages and it would be the types of food that are my  favourite things to eat..........so not tins of baked beans, chick peas or lentils for sure!
I reckon flour is one of the best basic store-cupboard necessities for versatility . It stores well as long as it's dry and double wrapped. The local flour from Essex I bought a couple of weeks ago is dated March 2021 and that's only a Best Before date so in theory it would be possible to keep a years supply tucked away.Yeast can be kept in the freezer and once you have those you have bread - and I'd never get tired of toast.
I've read that Ghee is a way of preserving butter and I know it's widely used in Indian cooking and keeps for a long time but I've never used it, so have no idea what it tastes like, is it only used in cooking? Can I spread it on my toast?
Most dried and canned products will  keep for ages. I have a lot of space at the back corner of a corner cupboard that I could fill with all sorts but how much does one person need to store?
and what about if all over 50's are told to shield through the winter, which was one rumour mentioned - don't like that idea at all!

If you've read this far you are probably as confused as I am.

Not a lot to blog about in this heat so I'll take a few days off.
Back Saturday

Posted by Sue in Suffolk at 07:00
Email ThisBlogThis!Share to TwitterShare to FacebookShare to Pinterest
Labels: Preparedness