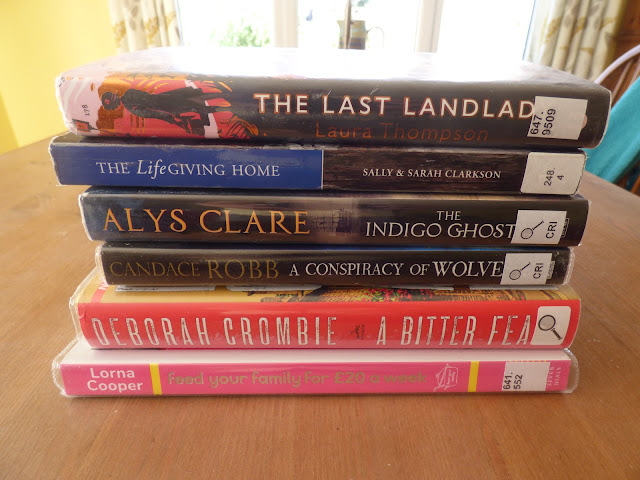 Three crime fiction and three non-fiction.
Candace Robb hadn't written a book in her Owen Archer historical crime series since 2008 so I'd given up looking on Fantastic Fiction for new books, then suddenly she's produced two more. Mine is the first from 2019 and I have the 2020 one on order too. The other two crime are both the latest in their series. Feed your family for £20 a week might have a few ideas - if they can be altered for feeding one person-  I'll flip through it. The Last Landlady is the authors story of her Grandmother who was the first woman to hold a pub license in her own right. Not sure what The Lifegiving Home is or where I heard about it but a quick look tells me I won't be reading it.

Andrew the library man said during the first weeks of lock-down he rang everyone on his membership list - all  the people who use the van - about 650 he thought and only one person had had any virus symptoms. The majority of people who use the library van are elderly  - I'm young compared to most! so there really weren't many people in Suffolk with covid - I've still not come across anyone who's had it. The window cleaner who's been out and about all through the last 5 months said he only knew of one person who'd died from it- and that was an elderly neighbour who'd gone into a care home and had lots of other background problems. He'd heard of a few people who'd had possible symptoms early on but nothing for weeks.
Still a safe place to live I think.

Library man Andrew is even more worried about keeping his job- he said almost everyone was returning their books but not wanting to browse the shelves or take any home except what they'd ordered - even with the safety measures put in place. This could be a good excuse for saying the mobile library isn't needed, as they were already talking about reducing it to just a small van with a limited choice.  As I normally order all my books and just collect from the van it would be easy for me to collect them from a branch, although I would need to go more often than once in 4 weeks as they don't keep requests on the reservation shelf for very long and I'd need to keep an eye on the due dates to avoid fines, something I don't need to think about at the moment.

Apologies for lack of comments on all the blogs I read. I've been turning the lap top off early and many people post in the evening so I don't get to read until next day when it always seems a bit late to leave a comment. For the same reason more apologies are needed for not getting round to replying to comments on here. ........hopeless!

Posted by Sue in Suffolk at 07:00
Email ThisBlogThis!Share to TwitterShare to FacebookShare to Pinterest
Labels: Library book photo