When I found the cheese making kit at a car boot sale last summer ( do you remember that time when we were actually allowed out?.......sigh......) I had every intention of  making at least 4 out of the 5 cheeses that had instructions  in the booklet. .

Mozzarella
Ricotta
Mascarpone
Halloumi
Feta
Wouldn't bother with Mozzerella as that is so cheap to buy and only gets used as a topping anyway.
I started last August with Ricotta and it was delicious. And then..........................
...........the kit was put in the cupboard, not really forgotten but not made use of either. Eventually I bought a two litres of Gold Top milk and really planned to make Halloumi. But when I had a closer look at the recipe it said the milk must not be homogenized and the supermarket gold top was. So it remained in the freezer until this week when I had a couple of days clear to make the Ricotta again and then the Ricotta and Spinach Lasagne - which is what I used it for in August.
It's incredibly easy to make. 2¼ litres of whole milk. (Half the recipe in the book). ¾ tsp citric acid dissolved in 25ml cooled boiled water. Very gently stir the water and citric acid into the milk using a gentle up and down motion. Then heat the milk gently until it gets to 185℉ or  85℃. Stir  gently at the bottom of the pan now and again to stop the curds catching.
The curds should be well separated  Remove from heat and leave to stand for 20 minutes. 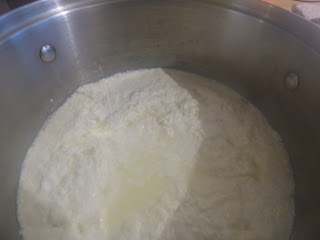 Then tip gently into a muslin cloth in a colander. (Sterilize cloth by pouring some boiling water through it first) Stir in 1tsp salt then leave to drain. 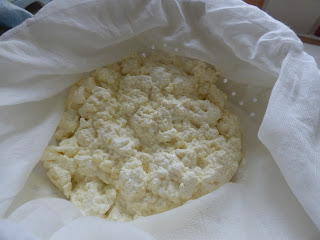 Spoon into the cheese mould and leave to drain again. I put it on a sloping tray so the whey runs away 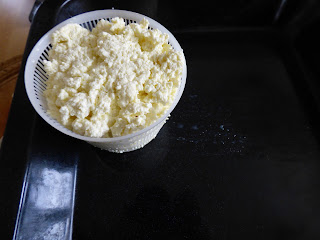 Then keep covered in the fridge for up to 5 days.
Verdict.......Very Good just like last time. This home made Ricotta is a whole different thing to the stuff in a tub from the supermarket.
I used most for  3 Cheese, Spinach and Pine Nut Lasagnes like I did in August. 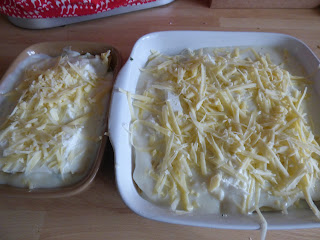 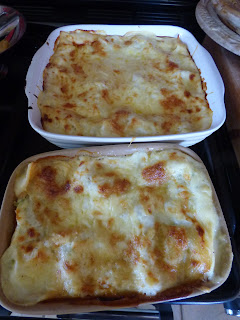 So I've emptied the freezer of 2 bottles of gold top but put in 7 portions of lasagne instead!  Not a helpful way to eat my way through the freezer stocks!
Once I move and get organised I'll go and get some proper Full Cream un-homogenized milk from the farm shop and have a go at the Halloumi.
Many Thanks for comments yesterday and apologies for not replying. I was either making the above, washing up after making the above or packing boxes.
Back Tomorrow
Sue
Posted by Sue in Suffolk at 07:00
Email ThisBlogThis!Share to TwitterShare to FacebookShare to Pinterest
Labels: Cheese making