February  was the Roman Februaruis  and comes from the Latin verb februare  meaning to purify because the Roman festival of purification took place on the 15th.

A February spring is not worth a pin

If the cat in February lies in the sun, she will creep under the grate in March

and the well known

February fill dyke be it black or white

which was really a plea from the farmer for plenty of wet weather ready for sowing seeds in March. Rain or snow, it's bound to be a wet and cold month, although there are often a few warm days

There is always one fine week in February

The February page from An Illustrated Country Year by Celia Lewis is Magpies..........the bullies of the garden! 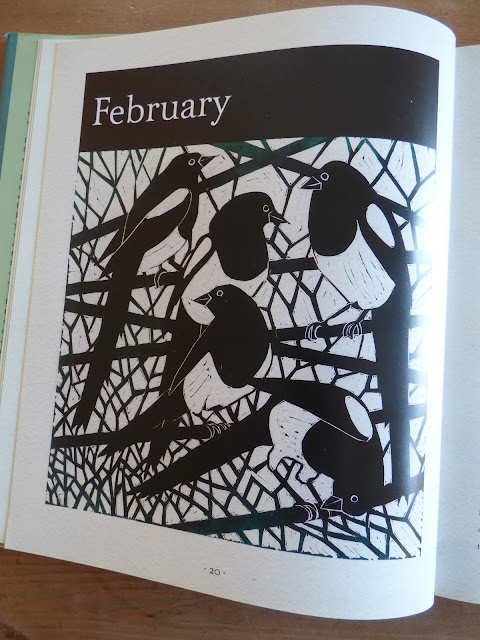 Numbers of magpies seem to have increased and it's rare for a day to go by without seeing them somewhere in the garden, meadow or lane.

My little book of country poems has one titled

The day is ending,
The night is descending;
The marsh is frozen,
The river dead
Through clouds like ashes
The red sun flashes
On village windows
That glimmer red.
The snow recommences;
The buried fences
Mark no longer
The road o'er the plain;
While through the meadows,
Like fearful shadows,
Slowly passes
A funeral train.
The bell is pealing,
And every feeling
Within me responds
To the dismal knell;
Shadows are trailing,
My heart is bewailing
And tolling within
Like a funeral bell.

If you weren't miserable about February weather before reading this then you would be afterwards!

February 1st is also .......... Imbolc (pronounced imulk) - The ancient Celtic feast day held to celebrate a stirring of life after winter and fertility at the beginning of the lambing season. The word Imbolc may derive from old Irish meaning 'in the belly'. The celebration  was presided over by the Goddess of youth and fertility -Brighid (later St Brigid) I wrote about St Brigid on the 1st February last year.   and made a St Brigids cross with paper strips which I kept until I cleared the "dresser" shelves ready for moving.
Back Tomorrow
Sue

Posted by Sue in Suffolk at 07:00
Email ThisBlogThis!Share to TwitterShare to FacebookShare to Pinterest
Labels: Folklore, Imbolc