First of all must say a big Thank you to new followers who have clicked the follower button -even though it's just as I'm starting to write a bit less often.  Have to say it's quite strange not writing a post every day although it certainly leaves a bit more time for other things.

Despite my beetroot being far too closely sown and not thining them, I've being pulling a bunch like this every week. I don't want them too big as they take too long to cook. 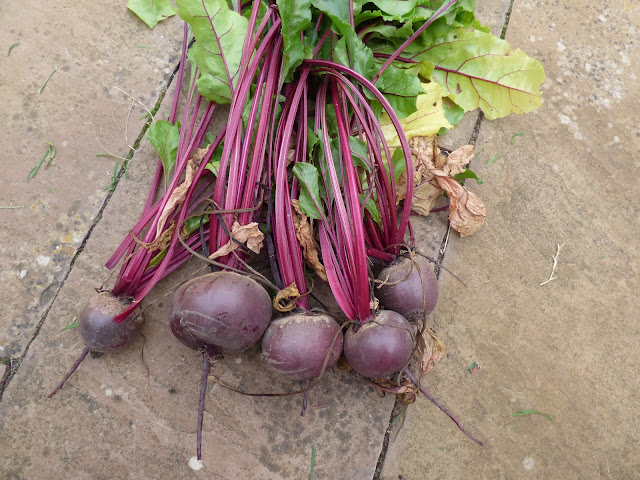 Thought I'd look in that new little vegetable book to find the history of these roots vegetables that we always called Red Beet to differentiate from  'Beet' grown in so many fields when I was young when Suffolk had two Sugar Beet factories. 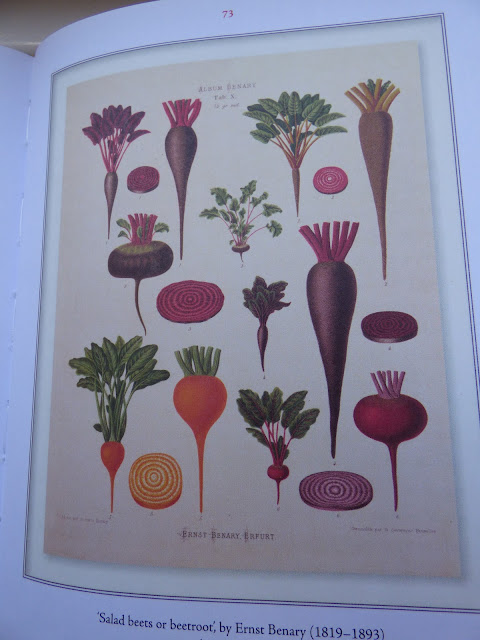 From the illustration, dating from the mid C19, seems there were different colours even then - but traditional colour is my choice.
According to the book apparently the place and date of origin of Beetroot is not definite but they possible came from the Nile region around 2,000 BCE. There was a wild beet growing in Mediterranian coastal regions which may have derived from Chard (or vice-versa). Greeks ate the leaves and the Romans cultivated the root which is maybe why in Tudor England it was called 'Romaine beete'.
Beetroot is rich in iron,calcium,carotene,magnesium, phosphorus, vitamim A and B complex. So very Good For You!
Mangolds, Mangle or mangle-wurzels used for cattle feed are a hybrid of beetroot and chard.
Over the last 40 years I've tried many different ways to preserve them for winter but they always seem too vinegary for my taste. Someone once suggested bottling them in a jelly made using vinegar instead of water - that didn't work either. Years ago we kept them for many months in a box of sand but I don't really have anywhere suitable to do that now - or the sand. So now I just eat them through the months they are available fresh.
Back in a while
Sue

Posted by Sue in Suffolk at 06:00
Email ThisBlogThis!Share to TwitterShare to FacebookShare to Pinterest
Labels: Beetroot