The August Country Diary plate is now out of the cupboard and on the bookshelves and I bought a bunch of the most summery flowers available off the market stall .... Sunflowers. I've got no flowers to bring in from the garden now - everything is struggling through our dry weather. (we had some rain yesterday morning, it was the sort that you can go out in and not get wet so didn't help the plants much) 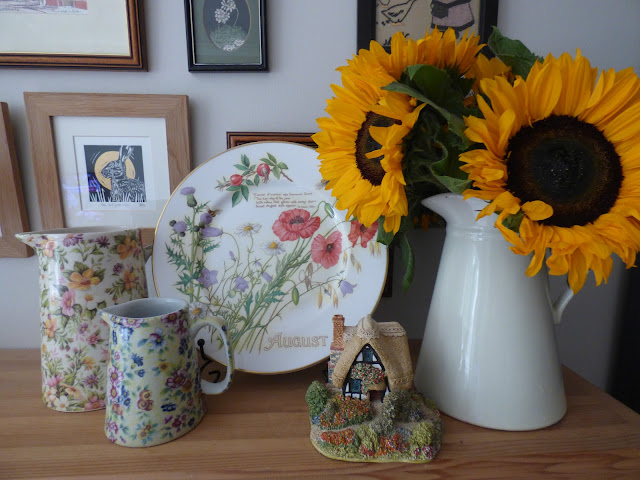 Edith Holden painted poppies in the August pages of her diary and although there might have been field poppies around in August 100 years ago, nowadays they are usually all finished flowering in July at the latest.
The name of this month  comes from Roman Emporer Augustus, because this was the month when he had his greatest good fortune. An extra day had to be added to August so that it wasn't inferior to July.......... named after Julius.
For the Anglo Saxons August was Weodmonath - The month of weeds - a prompt to keep hoeing?
Today is Lammas, the 1st of August was one of the Celts 'cross quarter' days. The dates that fall between the solstices and equinoxes that were used to mark the agricultural year. Lammas or Loaf-Mass marks the wheat harvest. In early Christian  days a loaf of bread made from the new crop would be brought to church to be blessed.
It was an important day in the country, as land which had been harvested could be made available for village people to graze their animals. It was once a public holiday when fairs were held.
Perhaps that was why the first Monday in August was a holiday for years until it was moved to the end of the month.
I decided to find out more........................ and discovered ..............
Currently England, Scotland and Wales all have eight public holidays per year, whilst Northern Ireland has ten and some countries have many, many more days off which has always seemed very unfair. (Not that it matters to me  anymore - as everyday is a holiday!)

There are not many weather sayings for August apart from some linked to St Bartholomew's day on the 24th but here's a warning..............
If the first week of August is unusually warm,
The winter will be white and long.
Back Tomorrow
Sue
Posted by Sue in Suffolk at 06:00
Email ThisBlogThis!Share to TwitterShare to FacebookShare to Pinterest
Labels: Folklore, Seasonal Display