Recent Reading - The Old and The New

Two of the library books read recently were quite different 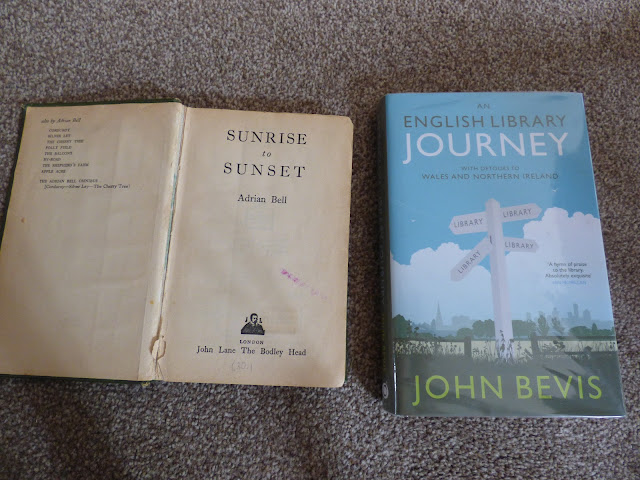 Adrian Bell -  Sunrise to Sunset.
Adrian Bell was born in 1901 and became a farmer and then a rural journalist. He was also the compiler of the first Times crossword.Many of his books are loosely based on farms that he worked on and where he lived in Suffolk
The library copy of Sunrise to Sunset that I borrowed was published in 1944 during the war on austerity paper and is kept in the Local Interest section of the Library reserve.
In May 1940 during the  fear of invasion on the East Coast of England,  Nora Bell took her three children to a rented home in the Westmorland village where her sister was a teacher. This little book is about Adrian Bell's visits from Suffolk up to Westmorland and his tales of helping on the farm there, which he was able to do as the harvests were about 4 weeks earlier in the South. The differences between a small stoney farm in the Cumbrian Fells and the flat fertile lands of Suffolk are many. A fascinating insight to how hard those farming families worked to earn a living on sloping, poor land through the war.
It's funny to think that Martin, his son just little boy in the book became a war correspondent and an MP and is now a very old man himself .
John Bevis - An English Library Journey. "One man's eccentric quest to obtain a membership card from every library authority in England". . John Bevis started  this tour of libraries when, unable to continue his job after an operation, he began driving his wife around the country for her work. While waiting for her he found he would have to  join the library in the town to be able to use the computers for his writing and editing work (a sideline to his main job). So in 2009 the quest began in Shropshire. I was most disappointed to see that his visit to Suffolk was to Sudbury library, when apart from the architecture (one of his main interests in each library) all he talks about were the people having trouble using the computers.
In his 2010 visit to Norfolk he went to the Norfolk and Norwich Millennium  library in the Forum in Norwich - the most used library in the country. But he fails to mention this library sprung from the fire that destroyed 1000's of books in the previous library and this is despite  his story of helping to rescue books from a library at Guildford Grammar School when there was a fire then in 1962.
An interesting little book if you want to know about the library tickets, the buildings, the changing use of libraries and the people using a few of the countries libraries.
Unfortunately after the Brexit referendum in 2016 he gets into politics a bit too much!
Back Tomorrow
Sue
Posted by Sue in Suffolk at 06:00
Email ThisBlogThis!Share to TwitterShare to FacebookShare to Pinterest
Labels: Book Reviews