I can't begin to tell you how good it is to have a greenhouse and a garden again. Growing things to eat must be ingrained into me after all our years at the smallholding.........and before that too.

Most of the things started in the greenhouse are doing well, outside it's a much sparser start - especially the beetroot. 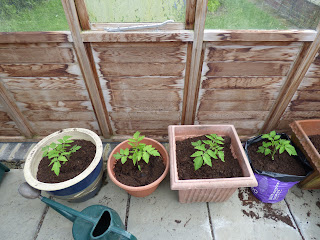 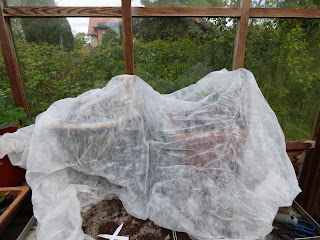 They are up on the staging and I'm going to fix a wire up and around the greenhouse frame to train them along.

Remaining in the conservatory are two more cucumber plants( no idea where to put them), 4 cherry tomato - just pricked out, 3 aubergine, 3 sweet pepper, 3 chilli pepper,and Basil  that I've just separated into 3 pots. 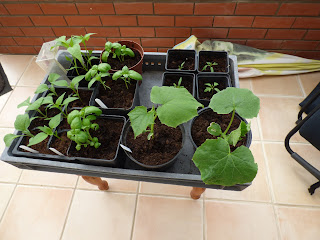 Also in the greenhouse, courgettes, squash, chard, spare aubergine and peppers. Pots sown with nasturtium and 2 tries at leeks with very poor germination and I've just sown a dozen climbing French bean seeds. The fig tree I found at Wilkinsons? -  is in the big pot on the right. 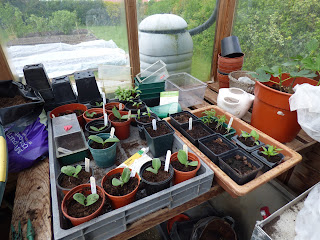 Outside in the beds, the potatoes are through and have been earthed up and covered with fleece. The bed containing beetroot is also covered with fleece but we've lifted it off the beetroot onto a mesh frame to stop our neighbours cat and/or the wind from flattening the seedlings. The lettuce plants Col got at a car boot sale are under a plastic tunnel cloche, growing slowly. There are a few radishes and rocket seedlings but 3 lots of lettuce seeds have produced nothing. 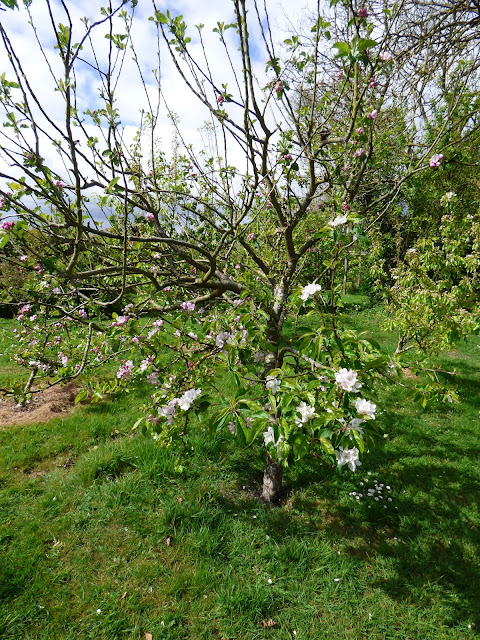 In the orchard (2 apple,2 Pear and one Plum) it's now really plain to see that this is a "family" apple tree grafted with at least 2 different varieties as one branch at the front has white blossom while the rest is pink.


Posted by Sue in Suffolk at 06:30
Email ThisBlogThis!Share to TwitterShare to FacebookShare to Pinterest
Labels: Greenhouse growing, Growing Food