I'm not sure about going to the Saturday Boot Sale again, it's got SO BIG that I really can't be bothered to look round the whole lot. A long running regular boot sale in Ipswich has just closed down so this could be a reason for the huge increase at Needham Market. It was also so dusty there today with gusts of wind blowing the light sandy soil everywhere,  by the time I'd looked round half and decided that was enough, it felt as if I'd got a mouthful of grit.

Anyway, my hour  yielded a few things from a man with loads of boxes of  house clearance stuff. £1 bought me.............a  tin of tomatoes (random!), some teaspoons (where DO teaspoons go?), a roll of cooking parchment and a plastic jug ( needed for watering things indoors). From elsewhere I bought a new wash-bag for £1....could be a Christmas present and a sheet of 3D decoupage for a card was 20p. 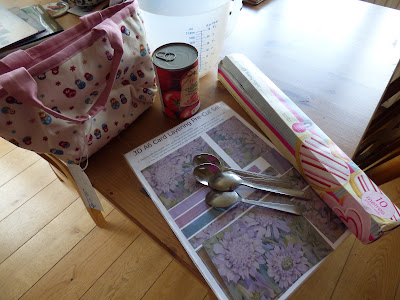 Then I splashed out on this pot of Osteospermum for £3, just because of the gorgeous colour, which is darker than the photo shows. 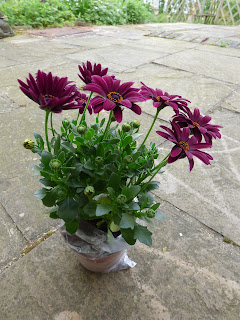 The flower bed just outside the conservatory has several purple flowers including an almost black tulip and some Aubretia. There were very dark blue hyacinths earlier. Also in the bed are two large patches of Crocosmia which are taking over, so I'll dig one clump right out, dig in some compost and plant the Osteospermum. Later in the year I'll look out for something else purple flowering and move the other clump of Crocosmia around to the bed under the front window.


Posted by Sue in Suffolk at 13:56
Email ThisBlogThis!Share to TwitterShare to FacebookShare to Pinterest
Labels: Car Boot Bargains, The Garden